The Nokia Lumia 900 is one of the first Windows Phones to support AT&T’s 4G LTE network. While there were some parts of the phone that left us dissatisfied, the LTE experience was is quite impressive.

I took the Lumia 900 to Midtown Manhattan to test AT&T’s 4G LTE service. I used the Lumia’s mobile hotspot app to get my MacBook Pro online in Bryant Park, where I saw impressively fast speeds.

The Nokia Lumia 900 is a reliabel hotspot that provides fast speeds with a good 4G LTE signal on AT&T’s network. 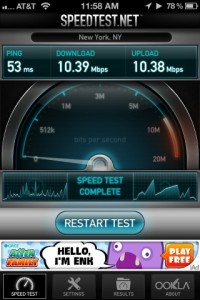 iPhone 4 speediest using the Lumia 900 as a mobile hotspot

AT&T 4G LTE data speeds ranged from 5Mbps down and 6Mbps up to 10Mbps down and 10Mbps up. Speeds will vary based on location and the number of users on the network. These speeds were fast enough to  do everything I would do at a desk, including, reading news online, checking email, reading Twitter, and the occasional IM chat.

Websites loaded within seconds over the 4G connection, and I was able to download a 60MB audio podcast in about a minute. Using the connection do download app updates from the iOS App Store was slower, but still only took about three minutes for the 108MB League of Evil 2 to download.

Later in the day, I used the Lumia 900 as a mobile hotspot to upload the hands-on video of the HTC EVO 4G LTE. The five-minute video took eight minutes and 42 seconds to upload to YouTube, which is fast for a 30.9MB video.

While the speeds were fast, using the Lumia 900 as a mobile hotspot did kill the battery. Using the phone only as a hotspot with two email accounts active on the phone the battery drained from 97% to 29% in two hours and 12 minutes.

That’s not nearly as long as the new iPad’s more than 24 hours as a mobile hotspot, but two hours as a 4G LTE hotspot is acceptable on a small battery.