After having announced the Nokia Lumia 900, one of two 4G LTE smartphones for AT&T’s network in the U.S., we got a chance to preview the hardware yesterday. The Lumia 900 borrows its aesthetics from the Lumia 800, which we had previously reviewed, along with the MeeGo-powered Nokia N9. Present on the phone is an 8-megapixel camera with a wide aperture sensor and Carl Zeiss optics, the same technology in a 1-megapixel front-facing web camera, a polycarbonate unibody shell, large 4.3-inch Gorilla Glass AMOLED display with Nokia Clear Black Display technology, a 4G LTE radio, single core 1.4 GHz Snapdragon CPU. 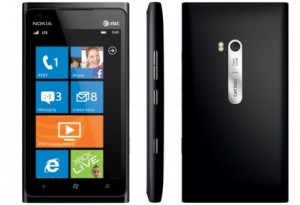 Nokia advised us on the Lumia 900 that we saw in cyan–black is also available as well–that the software hasn’t been fully finalized yet. That said, Tango will be pre-installed for cross-platform video chatting, and thanks to the wide-angle lens of the front-facing camera, you can fit more people into the shot now, even in portrait mode. For instance, both mom and son can now appear in the same video frame while trying to video conference with grandma.

The hardware is beautiful, functional, and elegant. The package itself is definitely larger in your hands than the Lumia 800, but those with larger fingers will appreciate the larger touchscreen.

In my early look of the hardware, the screen appears sharper and clearer than that on the Lumia 800, though Nokia says that both screens are AMOLED with CBD technology. This is surprising since the same WVGA resolution is present on both screens, and given that the display is larger on the Lumia 900, one would think that the display would be more sharp on the smaller-bodied Lumia 800.