The Nokia Lumia 900 finally has a confirmed release date and price. The flagship Windows Phone will arrive on AT&T on April 8 carrying a $99.99 price tag.

If April 8 is too far away, AT&T will start taking pre-orders for the phone on March 30. The black and cyan colors we saw at CES will be available on the release date. There will also be a glossy white version of the phone coming on April 22 if you’re willing to wait the extra two weeks.

The Lumia 710 has been available on T-Mobile for months, and is selling fairly well by all indications. The 710 is a mid-range device, though, while the Lumia 900 is a flagship phone for Nokia, Microsoft, and AT&T.

Strangely, the flagship Lumia 900 is only $50 more than the Lumia 710, and about $200 less expensive than most flagship phones. Nokia could easily charge $299.99 for the Lumia 900, but the lower price is one way that Nokia hopes to draw in new users.

Debuting a high-end Windows Phone at one-third the price of AT&T’s latest Android phone, the Samsung Galaxy Note, seems like a good way to draw some interest. 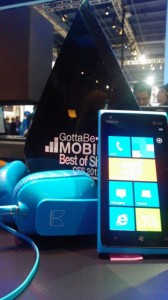 The Lumia 900, in case you’ve forgotten after so long, has a 4.3-inch ClearBlack Display, an 8MP Carl Zeiss camera, and an 1830 mAh battery. The only high-end component Nokia didn’t contribute to the phone is the PureView camera from the 808 PureView.

Everything else in the phone is top-of-the-line, or at least as high as the line can go with Windows Phone.

Check out our Hands on with the Nokia Lumia 900 below.