Windows Phone 7 news app Times of India is reporting the statistics of various Windows Phone devices that are accessing its content, and interestingly from the list, there are two smartphones originating from Nokia that have not been announced nor released. The Nokia Lumia 900 and the Nokia Champagne are both listed as devices that have recently accessed content from Times of India. 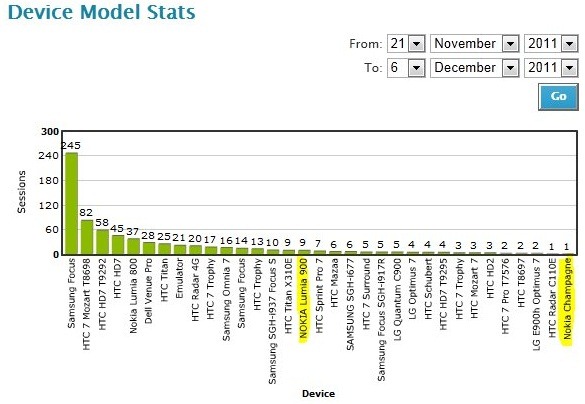 Though the Lumia 800 (review) is released as today’s flagship Windows Phone 7 device from Nokia, the Lumia 900 will outclass the 800 of today with improved specs and a larger display. The Lumia 900 will have a 4.3-inch AMOLED screen with Nokia’s Clear Black Display (CBD) technology along with 16 or 32 GB of internal storage, an 8-megapixel rear camera, 1.4 GHz single-core CPU, front-facing camera, and potential inclusion of a gyroscope. The device has been rumored for an arrival on AT&T in the U.S. The Nokia Lumia 900 has also been referred to in the past from its leaked code name of Ace.