According to sources who talked exclusively to Bloomberg, Nokia and the United States’ largest wireless carrier recently signed a deal to bring The Nokia Lumia 928 to Verizon, and plan to make the deal public sometime this May.

Verizon is holding an event on May 22nd at CTIA where we expect something new will arrive.

The Nokia Lumia 928 has been rumored to be on its way to Verizon customers since early this year, even photos with the carrier’s branding on them surfaced just last week. According to its sources, Bloomberg  believes that the Nokia Lumia 928 will ship with a 4.5 inch display, 8 megapixel camera, wireless charging and have an “a metal back”. 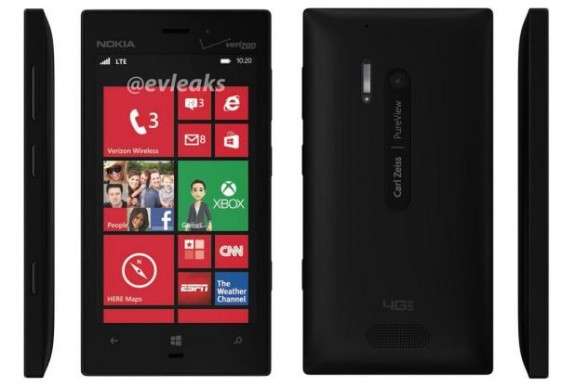 A metal back would mesh with most of the other chatter we’ve been hearing about the Nokia Lumia 928 since it was leaked. According to documents obtained by Nokia-Lumia-928.com, the Lumia 928 would boast different color options and an aluminum shell. A screenshot of Verizon’s internal computers that indicated there would be three different colors available to users, White, Red, and Black. Bloomberg’s report doesn’t corroborate these rumored color options.

The report from Bloomberg also makes no mention of the Xenon-flash that’s been the highlight of the recently leaked photos of the device. In those pictures, a large camera flash can be seen just to the left of the Lumia 928’s Carl Zeiss camera lens. Upgrading the from the dual-LED flash in AT&T’s Lumia 920 to Xenon flash would allow for crisper imaging in little to no lighting. This flagship would also include Nokia’s PureView camera technology, according to the leaked photos, so Nokia including a flash method that enhances the device’s low-light photo taking abilities is completely implausible.

The Nokia Lumia 928 is believed to have a dual-core 1.5Ghz Qualcomm Snapdragon processor, 2GB of Ram, wireless charging, and a 4.5 inch display that has a resolution of 1280 x 768.

Currently, the Nokia Lumia 920 is the only Nokia flagship available to customers in the United States, and it’s an exclusive for AT&T. In addition to the reported photos of Verizon’s new Lumia flagship,  photos of a device rumored to be the Nokia Catwalk device surfaced last week. That device is said to be a flagship on its way to T-Mobile USA with an availability around June.