Nokia may have just formally announced the Nokia Lumia 1520 and Lumia 1320 phablets last week, but it seems that Nokia is already planning on a third device with a large screen that for Verizon Wireless based on leaked video footage.

The video surfaced on the WPCentral Forums this past weekend, and depicts a device that nearly matches the design Nokia Lumia 928, the alternative to the Nokia Lumia 920 that debuted earlier this year.

According to the video, users can expect the Nokia Lumia 929 to include a 5-inch 1080p display. That’s just 1-inch shy of the 6-inch display included in the Nokia Lumia 1520. The video also makes references to a rear-facing 20 megapixel PureView camera that has the same Carl Zeiss optics that are included in Nokia’s other high-end devices. 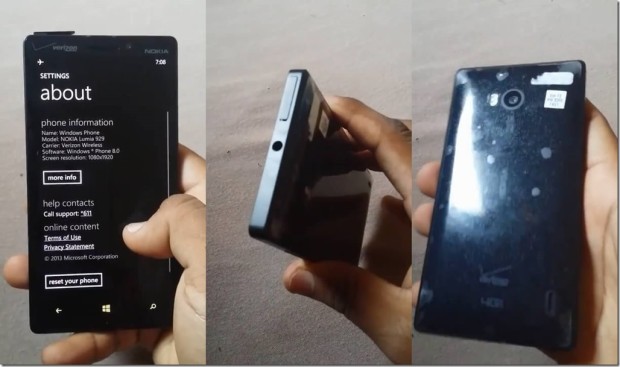 Screenshots from the leaked Lumia 929 video captured by LiveSide.net

Supposedly, Qualcomm’s Snapdragon 800 processor and 2GB of RAM are at the heart of the Nokia Lumia 929. Should the device make it to store shelves, it will be only the second and smallest Windows Phone device to include the quad-core processor. Nokia’s Lumia 925 for AT&T and T-Mobile only includes a dual-core processor.

While the Lumia 929 looks like the Lumia 928, the device ditches the pure polycarbonate casing of that device for a mix of aluminum and polycarnoate. It’s alleged that users will have the option of picking up the Lumia 929 in both black and white with 32GB or 64GB of storage sometime this November.

That timing would give Nokia a bit of breathing room to launch the device as they look to stay competitive against the Samsung Galaxy S4 and HTC One through the holiday buying season. In fact, should the specifications leaked in this video turn out to be true users can expect a device that’s actually more powerful than Samsung’s and HTC’s mainstream flagships.

Unfortunately, there’s still no word on exact pricing for the Nokia Lumia 929. Since surfacing earlier this weekend, the leaked video footage of the Lumia 929 have been removed from YouTube.