Ocassional Gamer‘s stat page revealed two new un-announced and un-released Windows Phone devices in the form of the Nokia Lumia and the Samsung Monument, though details are scarce about the phones. As to the Nokia, it’s unclear if this will be Nokia’s high-end flagship Windows Phone device or if it will be yet another mid-range offering, but adds to the list of leaked names that we’ve already seen so far, including Nokia Sabre, Nokia Sun, and Nokia Sea Ray. Moreover, it’s unclear if the Nokia Lumia may be a re-branded version of a prior Nokia leaked device for a specific carrier. 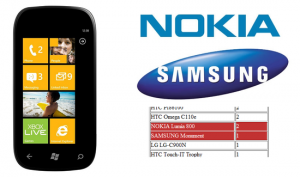 The Samsung Monuent is another phone that’s curious. So far, Samsung has announced two new Windows Phone devices to sport Mango for AT&T, a Focus S flagship Windows Phone device and a mid-range Focus Flash. The Focus S will be similar to the Galaxy S II–both devices will sport a 4.3-inch WVGA Super AMOLED Plus display and both will be geared towards high end users. The Focus Flash will have a smaller 3.7-inch Super AMOLED display and a lower resolution 5-megapixel camera instead of the 8-megapixel sensor on the Focus S. It’s unclear how the Monument will fit into Samsung’s Windows Phone lineup, but Monument sounds like a big name.

Pricing and release date are not known for either leaked handsets at this time.