While Nokia has had trouble making headway in the highly competitive U.S. smartphone market, the company may be set to launch its latest Symbian smartphone prior to a Windows Phone 7 device in the States. T-Mobile USA may be slated to pick up the Nokia C7, a consumer-centric edition of a phone that’s similar to the flagship Nokia N8. 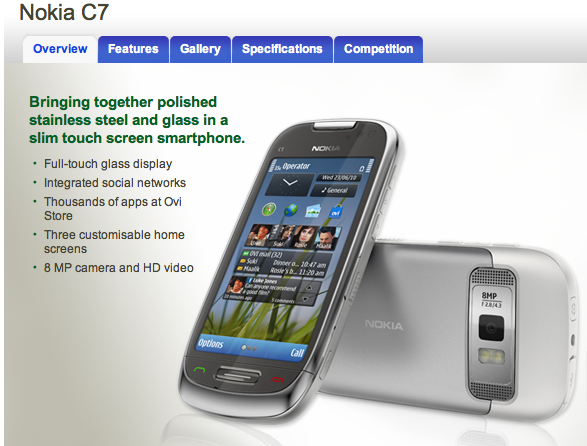 The device, which was reported by TmoNews, has a codename of Tiger. Whether the C7 will launch as the C7 or Tiger is unknown, but Nokia smartphones on T-Mobile have had their names changed and adopted in the past, for instance the Nokia Nuron is a variant of the 5800 Xpressmusic series, and the Nokia Mode for T-Mobile is a Nokia E72 variant.

Speaking of the Nuron, the C7 will be a great replacement for owners of the Nuron as it features better hardware specs and an updated version of the Symbian OS. The Nokia C7 will feature Symbian^3, like the N8, and will have an 8-megapixel camera with HD video encoding (the N8 has a 12-megapixel shooter).

I’ve played with the compact C7 at previous trade shows and it’s among my favorite smartphones based on design ergonomics. The curved back, compact form factor, and high quality feel are all positives. If subsidized via T-Mobile USA, the price point of this phone should be affordable.