Nokia has announced that the web app edition of Nokia Maps, which is compatible with the browsers on your iOS and Android smartphones and tablets, has been updated to include voice guided walking directions. Users interested in the capability can open their mobile browsers and visit m.maps.nokia.com to try out the speaking directions. The solution is currently available to users of both rival platforms for free. 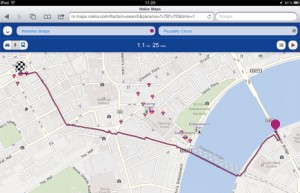 While Nokia’s implementation as a web app works good, there are still some limitations that Nokia Maps for the browser has that the native app for Symbian or Windows Phone (available as Nokia Drive) does not have.

Second, unlike the native app editions for Windows Phone and Symbian, the web app version of Nokia Drive will always require an Internet connection to be present. In the age of tiered data plans, users will probably be a bit more cautious about how much data is transmitted as a result of using the app. On Windows Phone and Symbian, users can pre-download the maps that they need in advance and could use a WiFi connection to do that so that they don’t dip into their monthly mobile data usage bucket.

And third, while the solution could be used as a free walking navigation alternative to the native Maps app on the iPhone, Android users in select regions already have access to Google Maps with Navigation, which provides for free spoken guided directions that also supports driving. As such, Nokia Maps needs to add more features to compete, at least on the Android platform.