After the Nokia Anna and Nokia Belle software update for the Symbian operating system, it appears that the Finnish smartphone-maker has Carla and Donna on deck as future software updates. According to dsmobile, it appears that Nokia may be working on a port of its swipe-based UI, which debuted on the company’s version of the MeeGo-powered Nokia N9 smartphone, that won’t make it in time for Carla’s release but may appear in Nokia Donna.

The swipe-based gesture-centric UI on the Nokia N9 has been heralded by users and media alike because of its simplicity and elegance lending to a button-less design for navigating the OS and software layer. 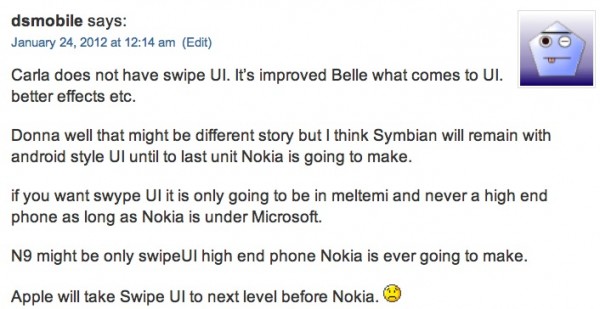 With Carla, it appears that Nokia will be adding refinements to Belle to deliver a more polished software update. Better effects and a more refined user experience will be part of the Carla’s update.

Interestingly, though, dsmobiles isn’t completely certain that the gesture-based swipe user interface will debut on Donna, but says that it is a possibility. Nokia has stated in the past that it will be porting the best-in-class experiences of its Nokia N9 to other smartphones, and we’re hoping that the swipe UI will be part of it as it is really novel. Unlike Windows Phone, which requires three OS-based navigation keys, iOS with the home button, and Android with either three or four navigation buttons, the swipe UI will not require any navigation keys.