After much speculation about a Lumia-branded Windows tablet from Nokia, so far the company has not made any announcements about its tablet efforts but it has anounced its Nokia Music service will be coming to Microsoft’s Windows 8 and Windows RT platform. At Mobile World Congress, the Finnish smartphone-maker announced that its music mix service that debuted for Windows Phone 7 and is pre-loaded on the company’s Lumia line of smartphones will also be headed to Windows 8 and Windows RT. 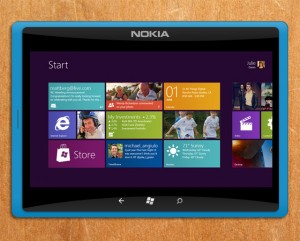 The app will be coming to Microsoft’s official app store for the platforms, though it’s not available yet and Nokia is still promising a coming soon date. And though the app may be free to download, Nokia will charge you by way of the subscription service, which will run U.S. customers $3.99 per month. This is the same as the Nokia Music+ subscription service.

Music+ allows for song skips and also will stream music at a much higher quality, so the subscription benefit will give you more on a Lumia phone as well.

The app’s introduction for the larger tablet and PC space is curious as Nokia currently doesn’t offer any such hardware offerings in those departments. This could probably be a testing ground for Nokia before it introduces a Lumia tablet of its own.

In the past, Nokia CEO Stephen Elop had said that his company is working on a tablet, but the company is still evaluating the market for opportunities. It’s also been rumored that Nokia had placed its own Windows RT tablet on hold when Microsoft announced its Surface RT tablet.

Other than music, Nokia also has developed some location-based apps, like Nokia Maps and Nokia Drive for turn-by-turn navigation. Potentially, those apps can help Nokia differentiate from the Surface and other tablets, especially if Nokia will add 3G or 4G mobile broadband, GPS access, and excellent hardware design.

With the Windows Blue software update on the horizon for Windows, perhaps Nokia is waiting for that to be unveiled before it debuts its tablet hardware.