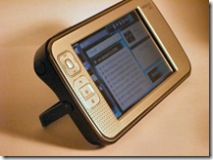 I’ve had the N800 for a few days now and after the initial un-boxing on Ustream the other night I have been playing with it for a little while every day since.  I have really enjoyed the ‘internet tablet’ so far, but I still have a long way to go to really get a feel of everything this little guy can do.  Like Rob with the Advantage, we don’t deal with too many devices that aren’t Tablet PC or UMPC related, but there are a few that enhance our ‘Mobile’ life, and the N800 could be one of those devices.

First during the unboxing.  Packaging was really well done.  I know this really doesn’t have much to do with the product itself, but that initial impression goes a long way.  Very nice presentation of the device right when you open up the box – Shiny silver bezel peeking out at you from under a colorful flap covering the right side.  Then I picked up the N800 – very small and light.  A look around the device and you can see the ports, the built in stand and all the buttons around the device.  Then you get the true feel of the unit after hitting the power button.

Then, you turn it on – Took a few to boot up the first time, but not too long for any discomfort on my end, much faster than booting up a computer.  The screen looks crisp with a few gadgets to explore already up on the screen.  The initial introduction to the device was positive.

So – Playing around with it.  So far, I have had some Skype conversations, a couple of GTalk video chats and  GTalk IM sessions with some people.  I have also been using the RSS reader to keep up on some feeds while not using my computer.  Surfing the web is really fun and fast on the N800 – especially in full screen mode.  It’s a lot better presentation than surfing on my Treo 750 from Cingular.  The home screen is a great information store – I can have the FM radio, feeds, Google search….  and the list goes on – right there on the screen when I turn it on.  One nice feature is the touch implementation.  If you use the stylus, most of the menus are smaller sized that you can hit with the stylus.  On the other hand, if you touch with your finger – most of the menus are bigger and easier to hit.  And last but not least – You can Ink.  Inking is no where near a Tablet PC or the improved Vista interface – BUT, it does reasonably well.  You can add how you write letters to make it ever better.

One thing I haven’t been able to do is use the Treo 750 as a BT connection with the N800.  I’ve tried a few times to get it to sync, but for some reason, DUN isn’t showing up as a service on the phone with the 750.  To be honest, I have been using WIFI at work and home and really haven’t needed to use it with the phone yet, so I haven’t spent too much time on this problem.  I might try this weekend again when I have more time. Oh – and why can’t you have video Skype calls – that would be great!

Is it a good companion??  I have to say yes.  Perfect mobile device – not sure…  I’m still playing :)  I’ll keep you updated.  In the mean time, if you want to get some more information, news and tips on the N800, head over to TabletBlog and check out what ThoughtFix has to say.