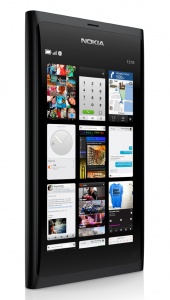 Nokia has now officially taken the wraps off of the N9 phone after numerous leaks and speculations. The MeeGo-powered smartphone, unlike early rumors, will feature a slate design, eschewing the sliding keyboard in favor of thinness. Referred to by codename Lankku, the Nokia N9 features a 3.9-inch curved Clear Black Display with AMOLED technology featuring an FWVGA resolution, giving the screen a 16:9 aspect ratio. The display is made using a special adhesion process so that there is no air gaps, similar to how Barnes & Noble was marketing the Nook Color tablet, meaning that there is less glare and reflection. The minimalist slab is devoid of buttons on the front surface, giving it a tablet-like feel.

What’s interesting though is that Nokia seems to be following Apple’s lead by utilizing a micro SIM for the Nokia N9, rather than the traditional larger SIM card format.

The phone is anticipated for release for later this year and will feature an Ovi Store for access to apps, which will be built using the Qt framework as well as HTML5. A few games and apps will be pre-loaded out of the box, including Angry Birds Magic, Real Golf 2011, Galaxy on Fire 2, among others.

Made of machined, colored polycarbonate, the N9 is actually a departure from Nokia’s recent metal flagships, like the Nokia N8 and Nokia E7 smartphones–the latter two running on the Symbian^3 platform.

The device features decent specs, including a 1 GHz OMAP processor coupled with a PowerVR SHX530 GPU and 1 GB of RAM. The smartphone will either be available in 16 GB or 64 GB memory configurations for storage.

It seems that with MeeGo, Nokia has finally dedicated itself to touch as the lack of buttons allows the UI to shine through with swipe gestures to access the programs, the notifications view, as well as the multitasking menu.

In terms of web browsing, the browser is based on Webkit 2 technology. NFC is also enabled on the Nokia N9.

The camera is an 8-megapixel auto-focus–not extended depth of field or fixed focus camera, fortunately–camera with Carl Zeiss optics and a wide-angle lens. Users can also record 720p HD video. The multimedia experience, like on the Nokia N8, is enhanced with Dolby sound. There’s also a front-facing camera for video calls.

What’s great about the phone is that unlike on the Maemo-powered Nokia N900, the Nokia N9 will feature Nokia Maps for free voice-guided, turn-by-turn directions–Nokia Maps is formerly known as Ovi Maps.

Another great feature borrowed from flagships N8 and E7 smartphones, the N9 will feature a pentaband 3G HSPA radio, meaning that it would be compatible on both T-Mobile USA and AT&T’s network and is well equipped for global roaming. The device features 14.4 Mbps download speeds and 5.76 Mbps upload, meaning that it is technically a 4G GSM smartphones by AT&T’s and T-Mobile USA’s standards in the U.S.

Though you’ll find plenty of radios, sensors, and other technologies to keep you up to date with the Nokia N9, in some ways the smartphone feels like a step backwards from the Symbian^3 Nokia N8. The Nokia N8 features a unibody aluminum construction, a 12-megapixel camera with Xenon flash, USB on the go capabilities for accessing flash drives while mobile, and HDMI output. The last two features are missing on the Nokia N9 and the camera on the N9 sports a lower megapixel-resolution.