When we talk about user experience designs, we think of user interfaces and how that affects our ability to interact with technologies like mobile phones and computers. However, Nokia is extending the interaction with user experiences thanks to its HERE locations and commerce business, and data gathered by HERE can help us see and experience the real world in a different way.

Thanks to a convergence in the space between the mobile space, largely occupied by mobile phones and tablets, and the automotive space, Nokia’s data collection with its HERE business could help improve the way we drive. Here’s research head Jane MacFarlane showed me how mapping could help improve every person’s experience with the real world–from pedestrians trying to discover new points of interests in a foreign city to drivers being able to maneuver the roadways in a safer manner to autonomously driving vehicles.

Through 21 billion points of anonymised data collected each month, MacFarlane and her team sees how fast each GPS-capable device is moving. This, according to Here, is different than a map of traffic, though the results could be similar. 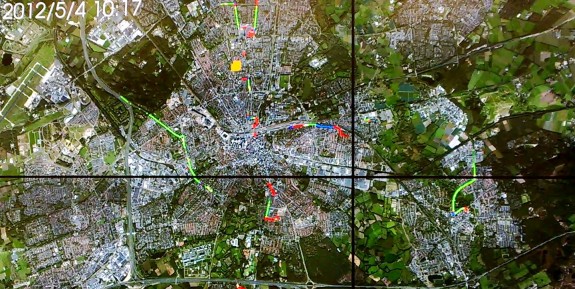 Finding a New Hot Spot in Town Based on Traffic

For non-drivers, this information could show where people are congregated at. This could be good for visitors to a new town or city looking for something to do. Rather than looking into a local city’s calendar, you could find spots where large groups of people are stopped at and either research that further, or through connected phones have that information be automatically delivered to you whether it’s a new art gallery opening, a new hot restaurant in town, or a concert nearby. This actually shows where popular interests are in terms of what is happening in or around a city, rather than a static calendar listing local events.

Thanks to big data, we can now better understand the impact of how decisions made to roadways impact the commute and traffic patterns. Earlier this year, San Francisco’s iconic Golden Gate Bridge had switched to a fully automated toll-taking system. So how did that affect congestion and did traffic move more fluidly as a result? According to how fast our phones, personal navigation devices, and other traffic information Nokia had acquired or licensed, the move did improve congestion significantly.

Drivers without the RF box, called FasTrak could just drive straight through. Cameras would capture the vehicle’s license plate and a bill would be sent to your home for the toll crossing fee. This automated system is helping the State of California reduce expenses associated with paying a toll collector an hourly wage to collect the fees for crossing the bridge. Additionally, drivers also benefit as there is now less congestion and traffic moves more freely in and out of San Francisco.

Connected Cars: Activating Your Windshield Wipers Can Get Other Drivers Routed Around the Rain

Thanks to smarter vehicles that are even more connected today, one idea out of Nokia’s big data research team at HERE is that drivers can help other drivers with just a simple task of turning on their headlights or windshield wipers.

For instance, when you turn your windshield wipers on high for faster wiping speeds, the car can transmit this data wirelessly to HERE. Once aggregated with other windshield wiper information from other areas in the driver, this could be indicative of a major rainstorm in a city.

If a driver planning a route into the city, HERE can push information out to the driver. Drivers going into the city would be alerted, for instance, to take more cautious driving behaviors and use slower speeds. Drivers who need to go through the city but without any stops in the city could be advised of a new route that can circumvent the storm so they don’t need to drive through a major downpour if they’re not comfortable driving in such environments.

Perhaps the best part about how HERE collects data is that each person with a phone is essentially a central sensor network that could collect real-time, real-world data and can transmit that information in an anonymised format to HERE. At the end, what Nokia has is how humans behave on the road and the crowdsourced driving behavior on how we handle turns, speeds, and curves on the road could be used to build better autonomous vehicles that more accurately reflect our own driving behaviors and patterns.

For example, analyzing a stretch of roadway, as seen in the video below, with a sharp curve, sheer physics tell us that drivers can handle the sharp turn more aggressively at faster speeds. However, when Nokia’s HERE division studied actual driving behaviors of drivers going into the curve, they find that drivers were not comfortable with what physics allows and instead took the turn at a slower speed resulting in less G force.

When we’re looking into the future with self-driving autonomous cars, this insight into human driving behaviors could allow engineers to build cars that drive the way we, as humans, drive, rather than just based on computational mathematics and physics. This will lead to more natural driving on the roadways, especially when autonomous and non-autonomous vehicles occupy the same road systems.

And by examining behavior on how drivers take a sharp turn or curve, HERE can also send an alert to new drivers to slow down dynamically as they approach the curve. The challenge is to make the alerts non-distracting but at the same time useful.

In a separate situation, MacFarlane told me that a couple years ago the Bay Bridge that connects San Francisco to the east bay city of Oakland had changed. Due to construction, city designers changed the entrance to the bridge on the Oakland side so that instead of entering the bridge from a straight path, drivers now had to drive into the bridge via an S-shaped curve. At the time, an unaware driver had a fatal accident because he didn’t know about the change. Potentially, with HERE, drivers can get push alerts to their cars that the roadways have changed or that there is a danger or construction to be on alert for when they approach something like this. And with digital billboards, potentially city highway officials could implement digital roadway signs that alert drivers of roadway changes and to alter their speeds to match what is happening in the real world.

And while none of these ideas that are presented by MacFarlane’s HERE research team are novel by themselves, they do show how the Ford Evos concept car could someday soon become a reality. The Evos concept was designed by Ford in conjunction with Nokia and represents a utopian vision of a smart connected car that can anticipate, predict, and analyze the real world to give you the best driving experience.

In order to be smart, a car will not only need wireless Internet connectivity, but it must be intelligent enough to understand the situation of today (road work, construction, local events), historical data (historical traffic data), and learn to adapt to the driver’s behaviors. HERE is getting there, and with all this data, Nokia could help to power the next real-world driving user experience (UX) as it explores the automotive space further.