We may be closer to getting the final details on the Nokia Catwalk and Nokia Lumia 928 devices, as Nokia has sent invitations for a Lumia centric event on May 14th.

The event, which will take place in London, flat out declares that it’ll be covering future devices with text enticing users to “See what’s next” and that the “Nokia Lumia story continues”.

According to TechnoBuffalo, the event is scheduled to last from 10 a.m. to 4 p.m. London time making it one of the longest unveilings we’ve seen from Nokia. 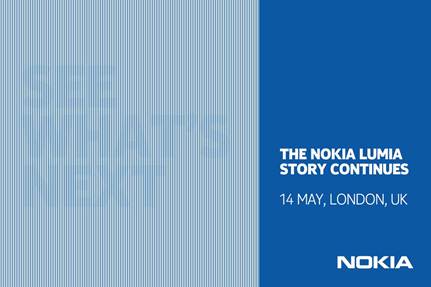 The invitation to Nokia’s May 14th London event.

These announcements could include Verizon’s Nokia Lumia 928. According to sources who talked exclusively with Bloomberg, that device was expected to be announced at an event on May 22nd during the CTIA conference. Rumored specifications included a 4.5 inch display, 8 megapixel camera, wireless charging, and a Xenon flash for use with the device’s PureView camera.

It’s also widely believed that the Nokia Catwalk device will be introduced around that same time. Allegedly, photos of the Lumia Catwalk leaked last week and showcased a slimmer Nokia flagship that was made of two separate materials, possibly metal and polycarbonate.  If true, this would be the first significant change in Nokia’s Lumia design esthetic since it introduced the Nokia Lumia 800 in November of 2011. Every Nokia Lumia flagship thus far has consisted of a block of polycarbonate plastic.

Rumored specifications for the Lumia Catwalk include a 4.5 inch OctaOLED display with a resolution of 1280 x 278, a dual-core SnapDragon S4 processor and 1GB of RAM.

Though all available evidence does point to this being a launch event of the Lumia 928 and Lumia Catwalk, it’s curious that Nokia would ask journalists to set aside six full hours for just a slate of refreshed devices.

Microsoft’s BUILD conference scheduled is to kick off only a month after and Microsoft has Windows Phone listed under a banner that reads “We’ve been hard at work and have more to share.”, it would seem that Nokia’s must have more information to share than what we’re being lead to believe, possibly a look at what’s coming next to Windows Phone in the way of updates.

Though Microsoft is widely believed to be working on an update to Windows Phone, codenamed Blue that will ship this fall, however so far there have been no official mentions of further updates by Microsoft itself.