With May 14th just under a week away, it appears that Nokia U.S. is beginning to tease and leak images of the Lumia 928. The Lumia 928 is expected to be one of possibly several smartphones that may be announced at the company’s London event. Other devices rumored for this event include a GSM variant of the Lumia 928 called the Lumia 925 as well as a 41-megapixel Lumia EOS smartphone with Nokia’s PureView technology borrowed from the company’s camera phone champ, the Nokia 808 running on the legacy Symbian OS. 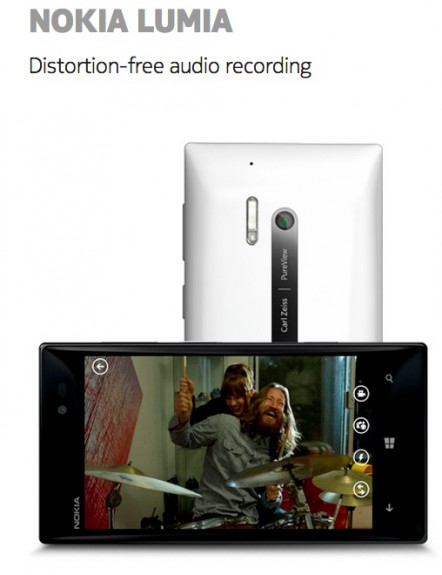 According to My Nokia Blog, the front and rear images of the Lumia 928 originated from Nokia U.S., though the publication was vague on details and where Nokia U.S. had originally posted these press photos.

From the photo, we can see that the front of the phone will employ a curved glass display, similar to the curved glass screen utilized on the Nokia Lumia 920. However, the design, it appears, has changed somewhat since the Lumia 920. Rather than the pillow top design from the Lumia 920, Nokia is going with a tapered back that is reminiscent of HTC’s 8X smartphone, another Windows Phone 8 smartphone that competes directly with the Lumia 928 in the high-end space.

Previously leaked images for the phone show that the edges of the Lumia 928 are still rather boxy and don’t quite taper as thinly as HTC’s 8X.

Unlike the HTC 8X, however, the Lumia 928 is rumored to have better imaging technology thanks to the PureView 2.0 features borrowed from the Lumia 920, including low light photography as well as optical image stabilization. The Lumia 928 will have a Xenon flash, something that the Lumia 920 lacks. Nokia had recently teased some sample images taken from the camera of the Lumia 928 in a recent ad.

The Lumia 928 is rumored to be coming to wireless carrier Verizon Wireless in the U.S. A recently rumored Lumia 925 is said to be a variant of the Lumia 928 for GSM networks. It’s unclear if the Lumia 925 will come to AT&T Mobility to replace the Lumia 920 flagship currently offered on that carrier.