It seems Microsoft and Nokia have a joint party planned for August the 17th and speculation has them possibly announcing the first Nokia-made Windows Phone at the event. The Unwired has revealed the invitation for the party, set to take place in Cologne, Germany where the companies plan on raffling off three Xbox consoles as well as three Nokia Phones phones as soon as they are available. The invite promises “exciting actions and surprises” and that could very well mean that we’ll see some official Nokia Windows Phone action go down later on this month. 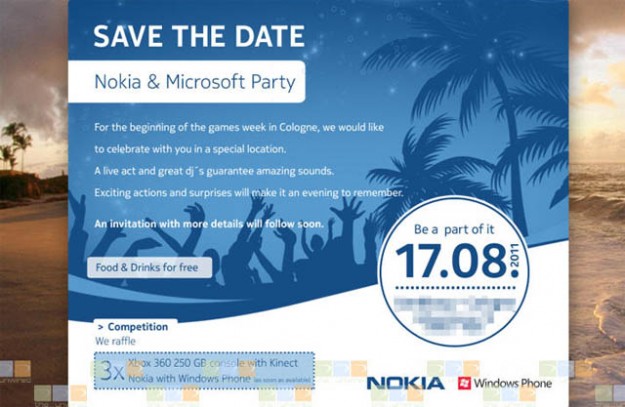 Before the invite became public, speculation rested on the Nokia World conference, which takes place on October 26th and October 27th, as the platform from which Nokia and Microsoft could announce the first Nokia Windows Phone. which is likely going to be the device we’ve seen leak out a number of times, a device that is currently codenamed “Sea Ray“.

That being said, Windows Phone 7.5 Mango was recently RTM’d (release to manufacturing) which means that a release is just around the corner. That also means that it’s  possible that Nokia and Microsoft could be showing off a Nokia device with Mango on board on the 17th.

We just wouldn’t count on it.