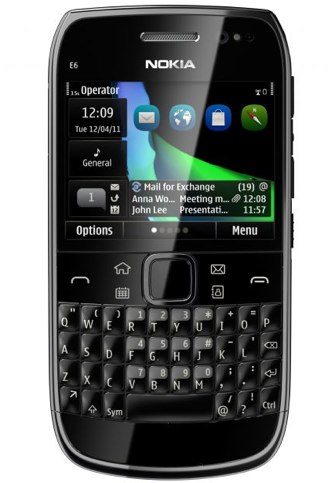 Nokia has just unveiled its latest Symbian-powered BlackBerry challenger with a front-facing full QWERTY keyboard in the form of the E6, which continues the tradition of the beloved E71, E72, and E73 (T-Mobile Mode in the U.S.) of solid, excellent hardware.

I was a big fan of the E71 when it first debuted–the handset became one of the most affordable smartphones when subsidized on AT&T as the E71x in the U.S. market. Now, with the latest E6, there a number of new improvements that were not found in the BlackBerry-styled smartphone line before, including a touchscreen high resolution display that’s showcasing the Symbian^3 OS underneath.

The E6 will be shipping in the second quarter and will feature a VGA touchscreen–a first for the line which was limited to QVGA resolution previously and without a touchscreen. The E6 is touted with remarkable battery life, strong industrial design, and an 8-megapixel camera with dual-LED flash. Like the Nokia E7 and N8 before it, this one also packs in a penta-band 3G radio, meaning that the single model can either work on AT&T or T-Mobile USA–few phones are compatible with both U.S. 3G networks and it’s nice to know that Nokia’s really making this unlocked handset easy for users to switch between either carrier. Additionally, it is a global phone, which will work on GSM, EDGE, and WCDMA (3G) networks internationally.

Unlike the N8, which is a multimedia beast with an autofocus Carl Zeiss shooter, this one seems to be using a full focus lens. The 8-megapixel rear camera can also record videos in 720p HD resolution.

Despite having a VGA resolution display, because the pixels are spread out on a small 2.46-inch screen, users are left with an astounding 326 pixels per inch density. This one’s Retina Display quality! 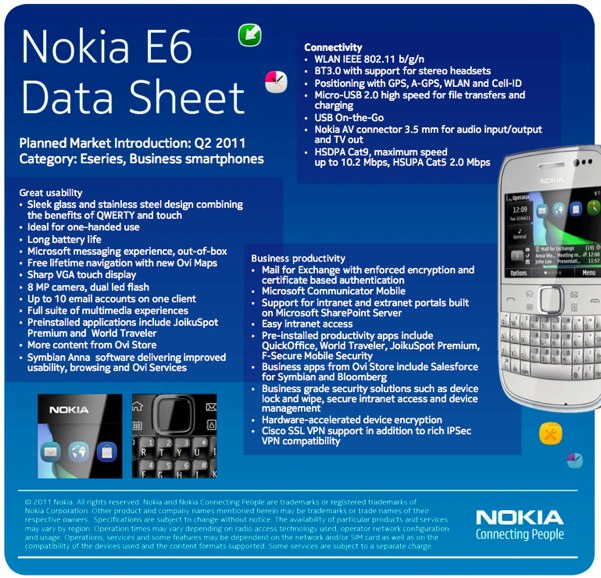 The E6 will have a more narrow form factor than BlackBerry, but I find that the raised keys on the keyboard on older models of the series help to ease typing accuracy and speed while also lending to one-handed use. You can easily type and grip the device in one hand while on the go, or with the raised keys you can also type with two thumbs comfortably thanks to the raised and domed keys.

Engadget‘s had some hands-on time with the device and the blog notes that the handset can go for a whopping 9 hours of video playback.

The device has a 680 MHz processor to power all the action underneath.

Also, as usual, Ovi Maps turn-by-turn GPS guidance will be included out of the box.