Mere days after Nokia announced the Nokia Lumia 625, the company’s largest screen smartphone to date, pictures of what seems is a device with a very large display that could compete with the Galaxy Note 3, have appeared.

A picture of the device’s screen bezel were posted to Chinese social networking website Sina Weibo and uncovered by LiveSide. In the picture, a rather large piece glass is being held with a suction cup by what could be an assembly employee. As the bzezel does sport a Windows key on the bottom of its frame, it is a device running some form of Microsoft’s Windows operating system, however that button design is shared by both Windows Phone and Windows 8 devices, so we can’t be sure which one will be installed on the device. 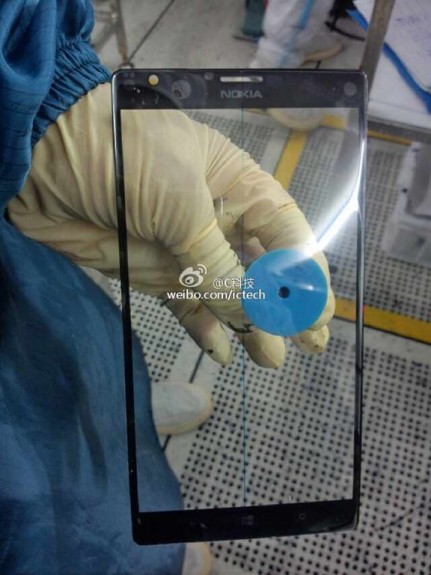 The screen bezel of an unannounced Nokia device with a large screen.

The top of the bezel frames out what is likely a front-facing camera, speaker and ambient-light sensor for controlling the device’s screen.

If this device does make it to market, it would put Microsoft and Nokia head to head against the tablets of other companies. Rumors indicate that the Samsung’s Galaxy Note 3 will pack a display as large as 5.7 inches. Unfortunately, the leaked picture doesn’t offer anything from which to establish the scale of this device’s display. Still, judging by the suction cup and hand holding the bezel, it seems the display is rather large.

Rumors of a Nokia device with “phablet” screen dimensions – somewhere between having a screen that’s too large to be a smartphone but too small to be a full-sized tablet – had cooled in recent days.  If Nokia does release a device with this screen size, it would likely début sometime after the next update to Windows Phone 8 GDR3.