Nokia has big plans with its locations business. Thanks to its Navteq acquisition, Nokia’s maps are now present in some 80 percent of in-dash vehicle systems as well as on Windows Phone. Now, through a re-brand to the HERE name, Nokia is making a big push into making cars more connected, more intelligent, and making the driving experience more natural.

Thanks to several emerging trends that are happening on the market today, consumers’ expectations of the driving experience have changed. Consumers no longer want to wait for the life cycle of a car–which could be as long as 7 or 8 years–to get the latest technologies when smartphones offer newer experiences much more frequently. We are also using more types of devices and we expect them to function similarly and with similar content. As such, Nokia envisions that its location cloud would help keep things synchronized and connected. Much like Google’s cloud, Nokia hopes that its Here cloud would be the premier cloud service for all things mapping.

So with the Here Auto experience, Nokia is offering a full turn-key solution that auto-makers can implement. This would allow car-makers–like the BMWs, Audios, Fords, and GMs of the world–to use Nokia’s system for everything in-dash, from navigation to remote features, to entertainment. This includes voice-based, turn-by-turn navigation with spoken street names to remotely locking and unlocking their car doors to remotely starting their engines and adjusting the climate control even before getting in the car.

Essentially, auto-makers could use the HERE experience–a similar experience to what Windows Phone and Lumia smartphones currently offer today for their in-dash GPS experience. Nokia will allow car-makers to customize the experience to fit each maker’s branding needs–BMW may use blue and white as the color tones, for example, to match the German car company’s brand colors. 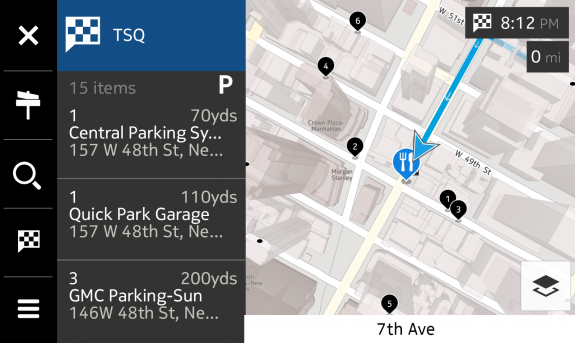 An SDK will also be available so auto-makers could extend the experience to entertainment and other apps. The platform, according to Nokia connected car marketing manager Christopher Thompson, is built on the QT so manufacturers can easily add music or streaming apps and layer on their own experiences with ease.

Nokia is also building its Nokia Auto Cloud, a place for users to synchronize their driving experiences. This premise is based on the assumption that the connected car would be connected to a 3G/4G network, or tethered to a smartphone that is connected to the Internet. Drivers could search for locations on one device, start their navigation in the car, and pick up their location search from their cars. 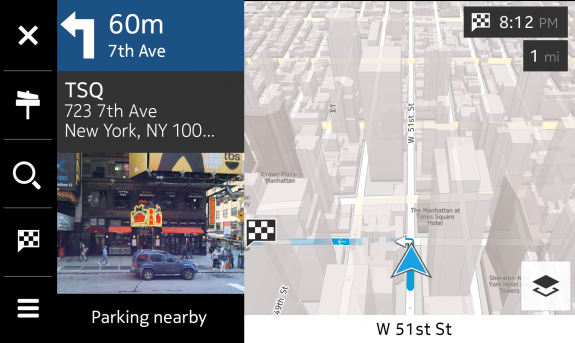 Additionally, the cloud would also personalize the in-dash system to fit each driver’s profile for multi-driver families. The husband can have a different view with different favorites than a wife if they shared the same car. Everything would be sync with a Nokia account between the phone via a Here Companion app, the car, and a tablet or desktop. According to Nokia, the company is working on apps for Android and iOS, but declined to give a specific timeline for a release.

The best thing about the Here navigation experience is that it examines your car’s sensor–as most in-dash systems do–and could extrapolate traffic and congestion. If you’re frequently braking, in the future, this data could be transmitted to Here’s big data servers and then Nokia could extrapolate this information to know that there’s congestion and automatically push that update to other Here drivers to reroute them around the traffic.

This would be a much safer way than Google’s system, which now relies on Waze for user-generated traffic and incident reports where drivers would have to interact with their screens, resulting in more distraction, to manually report congestion.

Activating your windshield wiper at high speeds could signify that the roads are wet and dangerous, and Nokia may want to reroute drivers based on other Here drivers turning on their wiper blades to avoid slippery roadways.

Nokia also works with local governments and the Department of Transportation to deliver live traffic data. This weekend in San Francisco, California, the Bay Bridge that connects the city to the East Bay where Oakland is located, is closed as Caltrans is readying the new span to be opened by Tuesday at 5 AM. Nokia is showing through its Here platform that the closure is already updated on its map system and that Here drivers are already being re-routed around the closed bridge.

By using smarter data, mobile connectivity, and a robust platform, Nokia is building itself a valuable location ecosystem that would provide tremendous value not just to consumers, but for its auto-maker partners. Time to deployment would be greatly reduced and a turn-key solution would allow Nokia to push out map updates to users. Auto-makers could choose what features they want to use and license and customize the package to make it their own.

At this time, Nokia isn’t announcing which car-makers are licensing its services. The company did say that, “HERE Auto is already integrated in Continental’s next generation Open Infotainment Platform. HERE is also working with partners such as Magneti Marelli and others to bring HERE Auto to the market in the coming months.”

Nokia is definitely bringing the best smartphone experiences to in-car navigation. The Here maps experience on the car, at least on the demo we saw today, looks as it does on a Lumia phone and feels similar. The larger display in the car allows for more information to be presented, along with split screens, lane guidance, and street view. 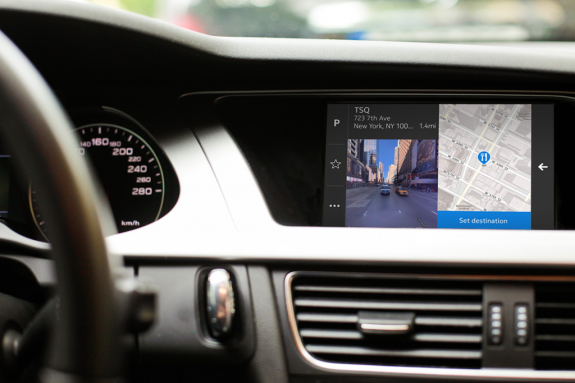 The companion app allows you to find where you parked your car with augmented reality that was initially introduced in the Nokia City Lens app, allowing you to figure out in which direction you should walk towards to get back to your car, a useful feature for those new to a city.

The Here connected car brings us one step closer to the Ford Evos concept that Nokia had developed a few years ago with the Ford Motor Company. When asked about Evos and when Nokia things it would come to market in the current vision, the company declined to comment, saying it’s up to its partners to make any announcements.