It looks like Verizon Wireless won’t be the only carrier to offer Nokia’s much-rumored flagship Lumia 928 Windows Phone 8 smartphone as T-Mobile is said to also offer a variant of the device. Originally known by its ‘Catwalk‘ code name, the device features similar specs to the current Lumia 920 flagship offered exclusively on AT&T’s U.S. network, but adds a Xenon flash and is said to bring an improved design.

We’ve recently seen a leaked press photo of Verizon’s Lumia 928 smartphone, which has more angular edges and a tapered backside. If the photos were real and not elaborate fakes, this could signal a change in design language for the flagship range. Gone is the pillowcase design that has been present on every Lumia flagship since the debut of the Lumia 800 smartphone and is a design that is still found on the Lumia 920. Instead, we’re seeing a device that looks very similar, aesthetically, to the competing Windows Phone 8X by HTC, also known by its HTC 8X shorthand name. 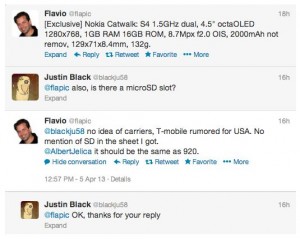 And like the Lumia 920, the Lumia 928 will sport the same image stabilized PureView engine that will allow for video recording without motion blur due to shaky hands as well as low light photography without the need for a flash. Using an external artificial light source in low light conditions, like a flash, may induce washed out photos, which is avoided in the case of PureView 2.0 optics thanks to an image stabilized sensor module as well as long shutter exposures. The 8-megapixel camera and Carl Zeiss optics is very similar to the Lumia 920.

What’s different is that instead of the dual LED flash module found on the Lumia 920, we now have a single LED flash module, which could also serve as an auto-focus assist light source, as well as a Xenon flash. This flash array was most recently found on Nokia’s 808, which has PureView 1.0 technology with a large 41-megapixel camera sensor.

So far, we haven’t seen any T-Mobile branded press images of the Lumia 928, but the phone is rumored for a debut between mid-May and June.

And according to one Twitter conversation reported on TmoNews, the Lumia 928 Catwalk will have a 4.5-inch octaOLED display with a 1280 X 768 resolution display, 1 GB RAM, 16 GB storage, an 8.7-megpiaxel f/2.0 camera, and a slimmer and lighter profile than the Lumia 920. 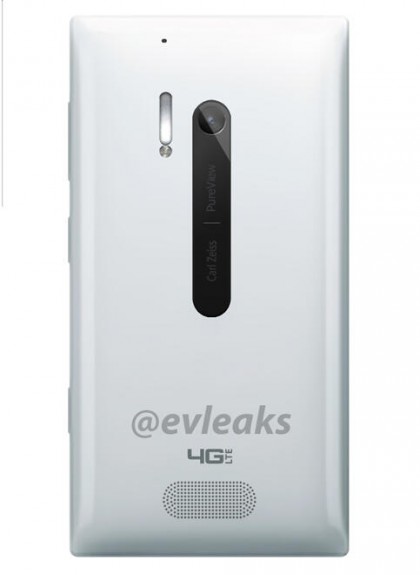 Lumia 928 in white shown by leakster @evleaks on Twitter

And more recently, we’ve seen a white colored Lumia 928 appear in images as well as the black one that we had reported earlier. A previous report suggests that the 928 would come in a variety of vivid colors with an aluminum-bodied enclosure, but we haven’t been able to ascertain the metal casing on the images leaked for Verizon.

At this point, it’s unclear if the T-Mobile and Verizon units would have identical designs or if the designs would either vary slightly or drastically.