As we posted earlier there has been an issue with the Barnes and Noble Nook Color. A firmware update was pushed out over Wi-Fi to many but not all of the devices. I was one who experienced this issue along with many others despite already manually updating the device. We are guessing that it was a malformed update that was mistakenly sent out to every device the moment that the device was connected to the Barnes and Noble servers through Wi-Fi regardless of whether it had been updated to the 1.2 firmware or not.

We received word from a Barnes and Noble spokesperson who said:

It would now seem that the devices affected by this are attempting to re-register with Barnes and Noble. Below you will see the registration screen. My Nook Color has been stuck in this mode since about 5:30 PM Eastern. But it took some work to get it to this point.

My Nook Color with the bad 1.2 update also had a Wi-Fi issue. Like others in the B&N forums, mine would not even connect to my own Wi-Fi network even though it would before it was reset and every other wireless device I own could connect. So, not knowing that this was a problem with the new update at that time, I manually reverted back to the old 1.0.1  firmware. Now my Nook color is trying to re-register with Barnes and Noble. My guess is that so many devices were affected that Barnes and Noble servers are overrun with devices contacting them. If that is not the reason it might be something worse, like a problem with our devices or their servers. Either way, many are not able to use their Nook Color right now. 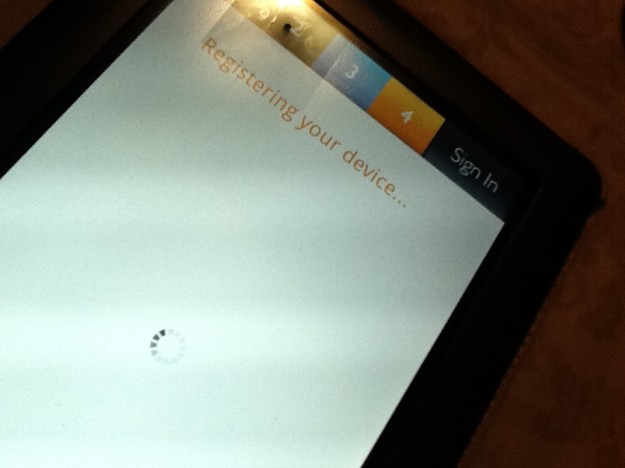 In the comments on our previous post there were some very unfortunate stories about people who just bought their Nook today or this week and having them rendered useless by this mistake. One person experienced this right out of the box. Talk about bad PR!

There is at least one user in the B&N forums who has been able to re-register after having his or her device affected by the mistake. This is why I believe that the problem now is just an overrun registration server.

Our advice is to put down your Nook Color and go read a paper book, catch up with your family and/or friends or go to Amazon and check prices on a Kindle. Alternatively you can just catch up on reading some great GottaBeMobile posts. I say this because, as some have reported in the comments on our site and at the B&N forums, tech support is suggesting that users wait 24 hours before calling back. They seem to believe this will take a little while to be resolved.

When the device is finally re-registered, you will have to download all your content and reload any content that you manually added to the device via the USB connection – things like documents or self installed books. Any apps you bought can be reloaded and the app store will tell you if you already own the app. If you marked up your books, then you will get that back when you download the book again, since those things are backed up for you by Barnes and Noble automatically.

The only people who will not be able to recover their content are the unlucky users who failed to back up anything they manually added to the device. This teaches you to always backup your content regularly. If you don’t have more than one copy of any important file, you are asking to lose it. That doesn’t help now, but in the future learn this lesson. Hook up your Nook Color and back up any files you download and keep copies of files you manually add to the device. Better still, not only backup on your local hard drive but also to an offsite location or cloud service.

UPDATE: It appears that now the registration issue is fixed. I have been able to register and all seems to be working.