Cutting a Micro SIM down to a Nano SIM for use with the iPhone 5 will soon be easier thanks to the Noosy Nano SIM cutter tool.

The iPhone 5 uses a new Nano SIM standard that is smaller than the Micro SIM and SIM cards found in the iPhone 4S and other phones.

This is a roadblock to using the iPhone 5 with a prepaid carrier or on an international carrier while traveling. It is also a hassle to use an AT&T or T-Mobile SIM in the Verizon iPhone 5 even though it is unlocked. 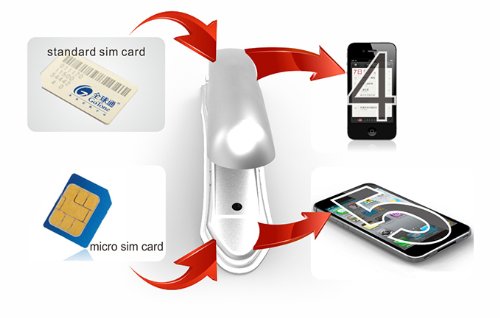 The new Nano SIM cutter should help with this transition, especially for users that can’t wait for or find a Nano SIM card from their preferred carrier.

Noosy will soon sell the Noosy Nano SIM cutter on Amazon for $26. This Nano SIM cutter will chop a SIM or Micro SIM down to Nano SIM size, leaving only the contacts. Users will still need to sand down the Micro SIM to the thinner Nano SIM thickness with a piece of sandpaper, but that’s simple compared to taking a steak knife to a Micro SIM.

The video below, from Noosy, shows the Nano SIM cutter in action, trimming Micro SIM to a Nano SIM and using it in an iPhone 5.

The listing offers a “mystery gift” which may be an adapter, but the listing doesn’t confirm that this includes a Nano SIM to Micro SIM adapter, so users may need to purchase one separately for about $7.

Until the Nano SIM standard catches on with International carriers, prepaid carriers and even with the top four U.S. carriers, this is the best option for users that want to trim a Micro SIM to a Nano SIM.