We’ve often recommended Notability for taking notes on the iPad or iPhone. That’s because it’s the best option on the iPad. There’s not another note taking app like it that runs similarly on both iOS and Mac. The app uses iCloud to sync between the two platforms. We’ll look at what makes Notability such a quality note taking app on iPad and Mac. 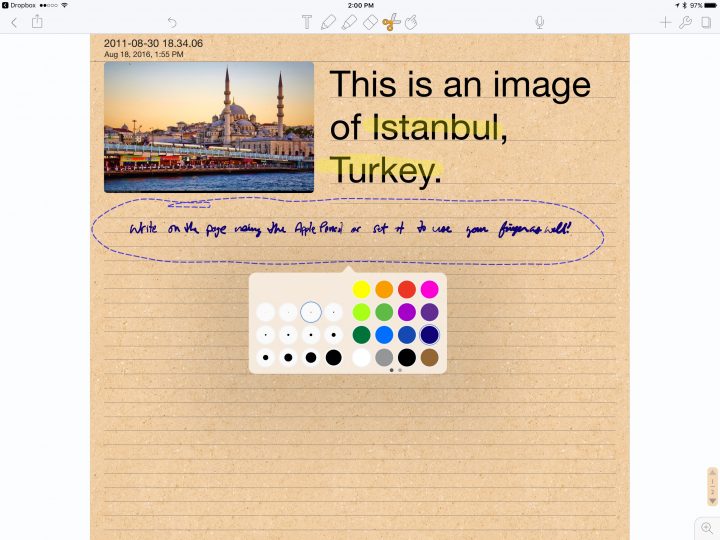 Select drawing or writing and change the color or thickness of the strokes.

Apple released 12.7-inch iPad Pro last year and in 9.7-inch size earlier this year both with the great Apple Pencil for drawing and writing. The release transformed Notability from a really good note taking, diagramming and simple drawing app to a fantastic one. 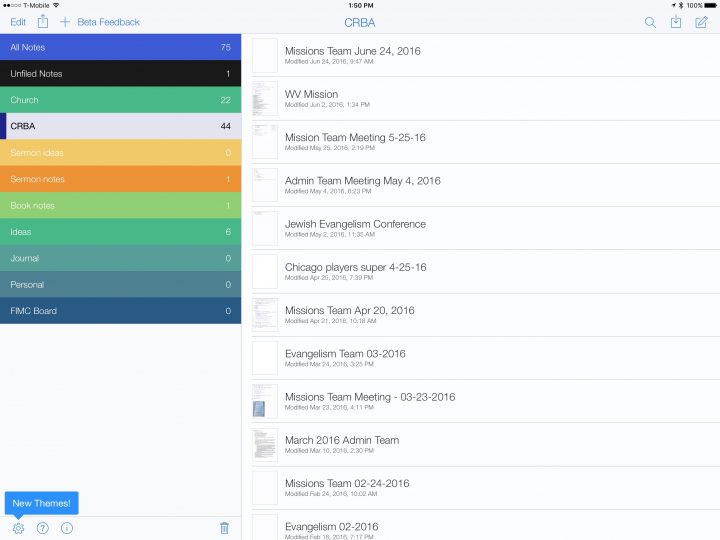 The app organizes notes into folders along the left. They’re color coded to make it easy to find what you’re looking for. Tap a folder to see your list of notes. The list shows the note titles and the date they were last used.

From the note organization screen users can search for note titles and text typed in notes. The import button in the middle of the three buttons in the upper left corner will let users bring notes from Dropbox, Google Drive, Box or a WebDAV site. You can import a PDF file from say Dropbox and begin marking it up in side a new note or when you add it to another one. Other file types supported include images. This places the image on a note page ready to write around it or on top. 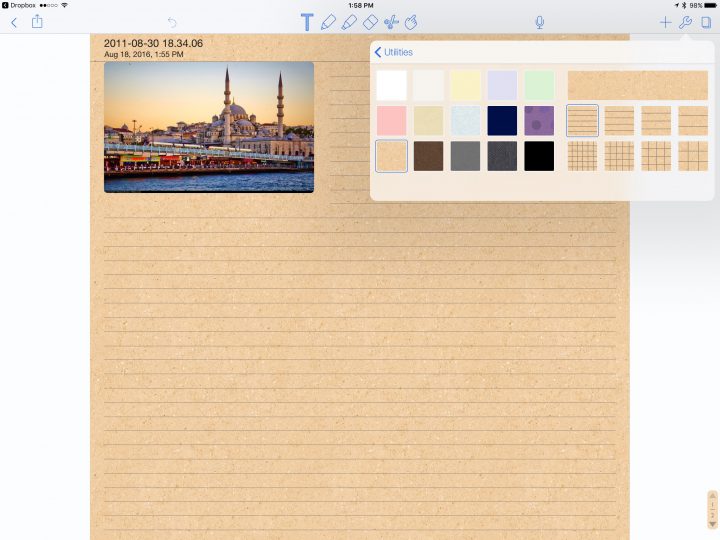 The note screen features a toolbar across the top with the note taking area using the rest of the screen. The user can change the look of the note page. I prefer a narrow lined page for my notes. The button in the upper left corner that looks like a wrench allows users to select Paper to change the background. You can also set the default paper look from the app’s Settings. Download others from Settings as well. 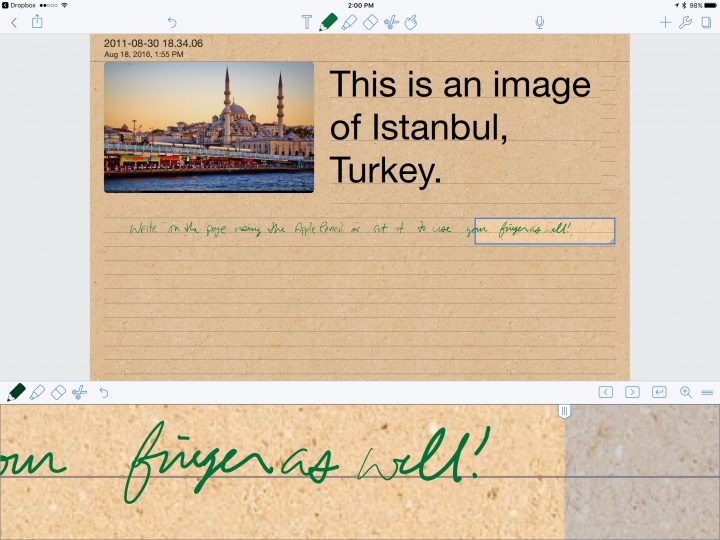 Tap on the magnifying glass in the lower left corner to open the zoomed writing feature.

The app allows the user to write directly on the page, but the zoomed writing feature makes it easier to write small letters and words on a lined page. Users can select the text using the selection tool, which looks like scissors, on the toolbar. Move the text or other selected objects by dragging them with your finger or the Pencil. Press and hold to change the thickness or color of the words or drawings. See the first image at the top of this post for a screenshot. 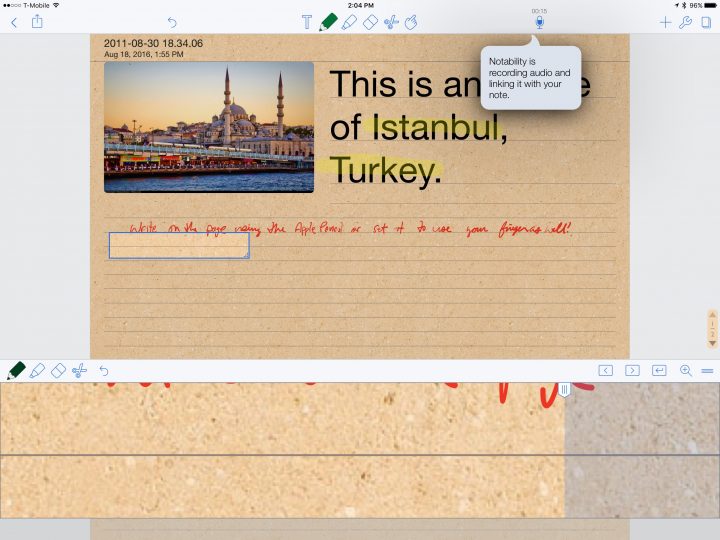 Tap the mic icon to begin recording. The recording syncs with your writing or typing.

Notability also includes audio recording. Tapping on the mic icon on the toolbar begins the recording. It syncs the recording with note taking. Tap on a note with recording associated with it to listen to what was going on in the room when you wrote the note. 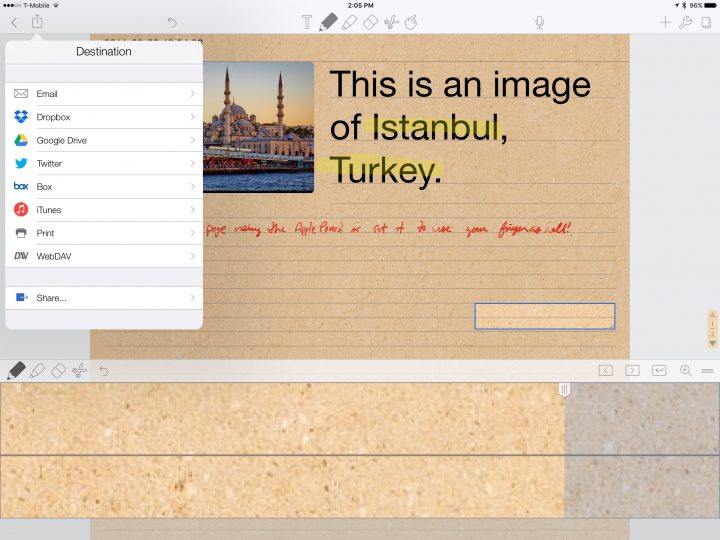 When you’re finished, you can export your notes using the built-in sharing features or the iOS Share feature.

We’ve covered the basics of using Notability for iPad. It works similarly on iPhone, but the app hides some of the toolbar features.

Here’s why it’s the best note taking app on iPad: 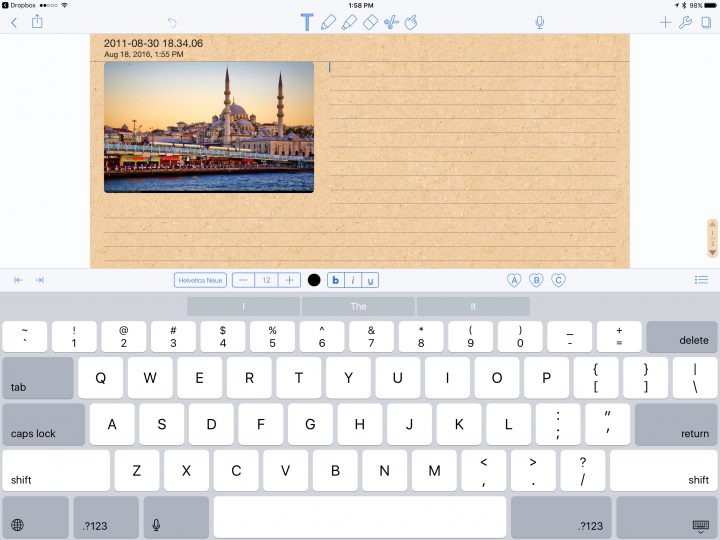 Notability on the Mac 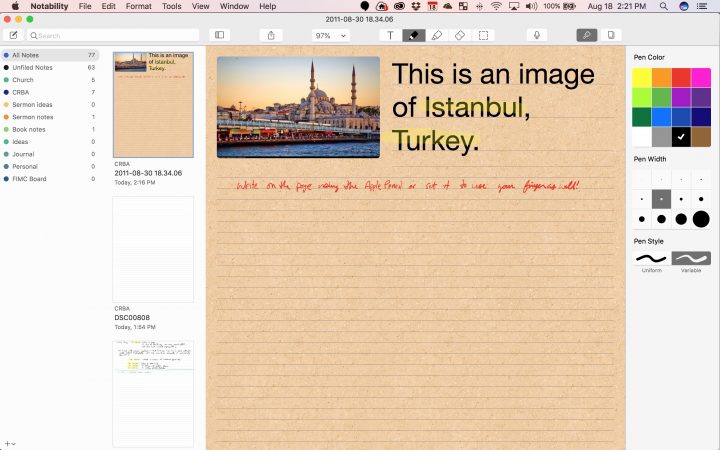 Notability for Mac works almost the same as it does on iPad. The app layout is the same with a few exceptions. You find the Settings in the normal location for Mac Application Preferences – under the program’s menu name in the menubar. Also, most of the features show up in the menu as well as behind onscreen buttons on the toolbar. There’s no zoomed handwriting mode. However, when the user clicks on the button second from the right on the toolbar, we get a nice pen settings section along the right edge .

Having the app on all platforms helps people who use their phones, tablets and computers for note taking. Adding something on one platform allows the user to use the notes in the program on other platforms. For example, it’s easier to insert a photo taken on my iPhone into a note that I created on my iPad thanks to the quick and reliable iCloud sync feature. Then I can open the same note on the Mac when I get home and convert the entire note to a PDF ready to share with coworkers or fellow students.

The iPad and iPhone version costs $7.99. Buy it once and use it on either device. Interestingly, the Mac version costs only $5.99 on the Mac App Store. As mentioned above, there’s not a version for Windows or Android.