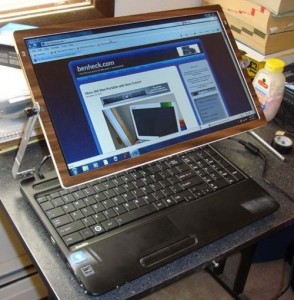 A notebook modification that makes a Toshiba Satellite more portable and flight-friendly to fit airplane tray tables actually takes on style cues from some Tablet PCs. Notably, the device hacked by renowned Benjamin J. Heckendorn with its swiveling screen over the keyboard concept looks familiar to the recently released Dell Inspiron Duo, but the style has its history more deeply entrenched in Tablet PC computing history. 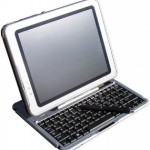 To achieve its space-saving designs, designer Heckerdorn’s Toshiba Satellite notebook may not have a touchscreen or active digitizer overlay, but its screen design is reminiscent of a few Tablet PCs of yore, including the Acer C200 series design, the Electrovaya Scribbler form, and one from HP Compaq in the TC100. Heckerdorn’s modification puts a swiveling screen on two metal arms on the side of the Toshiba Satellite. 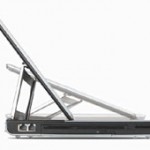 By having the screen floating over the keyboard, the modification aims to conserve space as the display wouldn’t need to be angled back to far. For frequent travelers, this feature will prove to be useful on cramped airplane seats, especially in coach class. 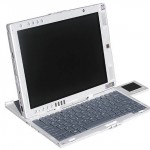 In a post-iPad world, will we see the rise of convergence products that take on some old Tablet PC form factors? The newly launched MacBook Air demonstrates that consumers are ready to embrace not just portability, but also power and performance in a sleek form factor. With keyboards, swiveling or rotating displays, and ink and touch support, tablet PCs and their convertible form factors may be the next trend. Question is if Microsoft is ready to push the tablet limits beyond a targeted enterprise product.

The video of the modified Toshiba laptop is embedded below: