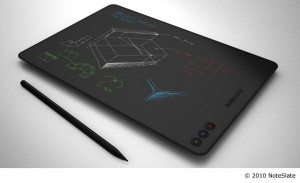 Been trying to decide if a note-taking slate device called the (wait for it) NoteSlate is cool or not. On one hand, it’s a slate with an active digitizer that looks pretty slick. On the other hand, its only use is to write or draw notes on the screen. Even at $99, it strikes me as too limited as a standalone device, and yet I feel it would make a really good PC peripheral.

The NoteSlate, which is supposedly coming to market in June, is being marketed as a low-tech slate. The e-ink display has a 13″ diagonal, equivalent to A4 paper size, and resolution of 1080×750. There are several color options, including one that supports four colors (red, blue, green, and white), but most are only one color on black or black on white. Battery life is 180 hours. 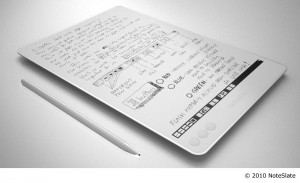 Input is pen-only. The pen includes an eraser tip but does not appear to be pressure-sensitive. A magnetic holder allows the pen to be attached to the tablet.

There’s no mention of storage capacity other than SD card, so we can assume onboard storage is minimal. Connectivity is via mini-USB or a free optional Wi-Fi module, though there is no web browser.

That last option is the one that interests me. As a standalone device, I think the NoteSlate is too limited. But I would love something like this as a document reading and markup tool. Shoot a PDF to it over Wi-Fi, read it and/or mark it up, then send it back. If they add this functionality in a later firmware release and make it a really easy drag-and-drop swap, I think the NoteSlate would be a very useful device. 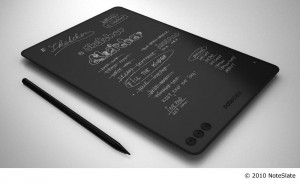 Via Wired and kottke.org