Notification Alerts Show How Apple Could Improve for iOS 7

With each new version of iOS, Apple delivers an upgrade to parts of the user experience and this Notification Center mock-up shows one of the features we hope Apple includes in iOS 7.

If Apple follows their pattern for software releases, expect to see iOS 6.1 arrive this Spring and the announcement of iOS 7 at WWDC 2013, with an iOS 7 release date tied to the iPhone 5S release, or whatever Apple calls the next iPhone.

In this concept, Sentry on The Verge forums, shows how Apple could make iPhone notifications easier to use and respond to. With the Notification Center, Apple made it possible to avoid the interruptions of pop up alerts, but the banner notifications don’t allow users to quickly respond to a message or Tweet without leaving their current app.

In the mock-up below, we see one way Apple could improve notification in iOS 7, by offering more control to users. In this manner, the iPhone shows an improved Alert setting that slides down like a Banner notification, but offers more. 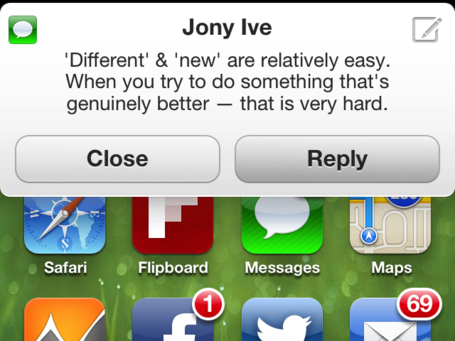 A better notification systems shows what we could hope for in iOS 6.

The image above shows how a user on iOS 7 might be able to quickly respond to a message without leaving an app. Sentry doesn’t leave the improvement here,. The image below shows how a Banner notification could turn into a larger notification that allows users to respond quickly.

Users could quickly reply to messages in this concept.

Sentry is also known for offering a better app switcher for the iPhone 5, which shows an app card and better media controls. This is on the way to becoming an iPhone 5 jailbreak tweak, which is how some of the best iPhone features start.

With Scott Forstall out of Apple after the Apple Maps issues we could see a new look for iOS 7 that removes some of the use of real world objects to influence the look of the iPhone and iPad software, known as skeuomorphism.

Apple may spend less time on leather stitching for apps and more time on improving the user interface in ways that make a difference to how we use the iPhone. With Jony Ive at the helm of the user interface, it could happen.