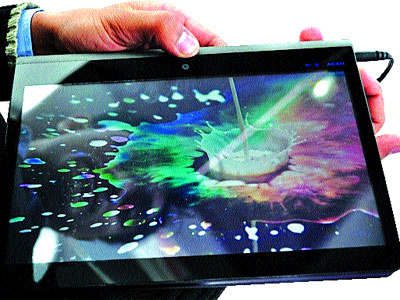 It may still be too early to tell but the Notion Ink Adam seems to have run the gauntlet of bloggers and press at CES 2011 and come out the other side in very good shape. By and large the coverage I’ve seen indicates that folks are very impressed with what they are seeing from Notion Ink.

Remember, Notion Ink has been playing this game differently on all levels, from the hardware design to the Eden UI, to the PR. They’ve been slowly teasing since last January at CES, and they’ve ratcheted the teasing up heading into this year’s show. They took some knocks for some early pre-order difficulties and because folks hadn’t seen anything for real there were even whispers of vapor ware emerging out there.

But that seems to be behind them. One other thing of note here. While we’ve been covering a host of Tablets and Tablet wanna-be’s, out logs indicate that the Notion Ink Adam has quite a bit of interest. In fact, it is one of the leading searches bringing folks here to GBM.

I’ve already linked to some excellent coverage from Slashgear. Engadget has also done some excellent work on this device here, and they too seem quite impressed. Here are three posts you might find worth checking out. They all contain video.