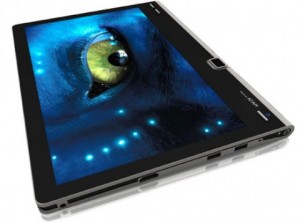 Notion Ink’s Android-powered Adam tablet is almost here, and despite running on Google’s Android 2.2 Froyo operating system which Google says is made for smartphones rather than tablets, the 10-inch tablet with its low-power, sunlight-visible Pixel Qi display will come pre-loaded with 20 apps that are said to be tablet-ready.

Like rival Samsung, which had preloaded its Galaxy Tab Android tablet with several customized apps–emails and calendar being notable ones–with panes, or windows, to make it easier for users to navigate and make use of the larger tablet screen, Notion Ink will bring 20 apps with up to 3 panes for a better user experience on the Adam slate. These apps will make use of Notion Ink’s Eden user interface, to truly exploit the 10-inch touchscreen and make the Adam into a tablet rather than an oversized Android smartphone with scaled up apps. These apps include email, calendar, paint, gallery, settings, file browser, and a full suite of Office applications. The company has also been working on bringing a new user interface to tabbed browsing on the browser.

The Notion Ink is coming soon and pre-orders will begin in January. The main appeal of the device may be the Pixel Qi optional display, which promises colors and video display capabilities of traditional LCD displays, but also the power-saving feature and sunlight readable screen that’s been associated with traditional E Ink displays.

While Google has stated that its current Android operating system–at version 2.2 and also known as Froyo–isn’t tablet-ready, manufacturers such as Toshiba, Samsung, and Viewsonic are all releasing Android 2.2 slates of 7-inch screens or larger. These devices usually run apps on Android Market that scale up to make use of the entire larger display, but don’t incorporate specific design and user interface elements such as multiple panes that will add value to having a larger screen display. Samsung has bundled a few apps that take advantage of the tablet UI scheme, and now Notion Ink will be delivering up to 20 apps that attempt the same goal; Samsung’s apps usually are offered with two panes while Notion Ink is promising up to three panes. For its part, Apple’s iPad tablet allows users to run either tablet-ready iOS apps or iPhone apps scaled to the larger screen, and it seems that Android tablet makers are aiming for a similar goal.