As they continue the endless march toward the release of their Adam tablet, Notion Ink has posted a well-explained article about the Adam’s design. Among other things, they extol the virtues of its wedge shape. Sounds familiar.

After going through a series of design changes, Notion Ink finally settled on a wedge form with a 3-degree elevation. Why?

1. Provide a Natural Angle of Viewing (else the device is horizontal and will face severe reflections, your hands obstructs more of the screen view and every thing specially test looks like a perspective view instead of straight )
2. Provide an easy way to hold the device (some devices are there are not there to hold, either too slippery or you don’t have confidence that you can hold it for hours), and
3. Swivel Camera (which will require a rotating arm and from here the cylindrical area emerged) 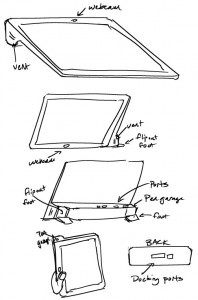 The phrase “F’n brilliant” comes to mind, mostly because that was Shogmaster’s response when I proposed a wedge-type slate design back in January in which I cited those same three points. And before anyone points out that Notion Ink announced their tablet last year, keep in mind, their initial mock-up was not their current wedge, which I did not see until later. Call it an example of parallel evolution, but I still made the argument for wedge design first.

Regardless, it’s a good explanation of the shape and other design choices of the Adam. The wedge design is well-supported. It’s a good-looking device, but the long wait until everyone can get a good look at the device is tortuous.