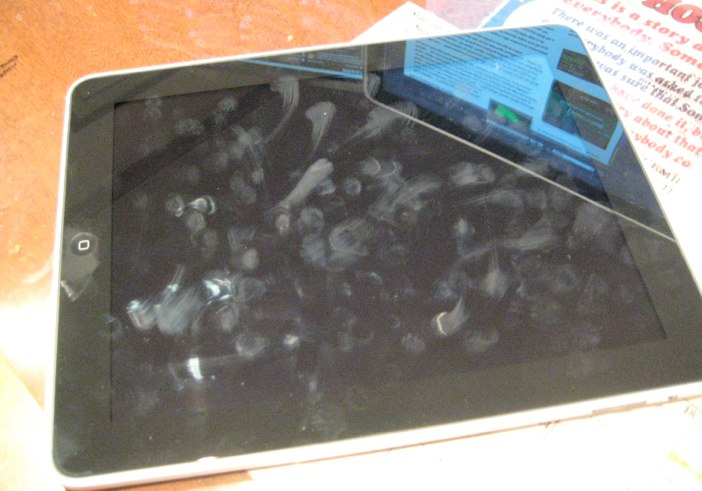 It’s no secret that one of the ugly blights of touch computing has to be greasy, smudgy, ugly fingerprints. Touch a screen and you’re going to leave a mark of some kind. No one can keep their fingerprints that free of grease and grime. It just doesn’t happen.

There are no real practical solutions for this that I’ve seen beyond the oleophobic coating that Apple puts on its iPhones and iPads. The coating doesn’t prevent fingerprints accumulating, but it does make it easier to wipe them off.

So, we just accept this as a way of touch screen life. Or does it present a compromise we’d rather not face?

Today I had an important presentation to make to a potential donor for the theatre. It was a lunch meeting. When we have those kind of meetings a lot of thought goes into what we call the “leave behind” piece. That’s simply a collection of materials that tell our story so that the potential donor can refresh his/her mind after the fact. I’ve been working on the materials for this packet for some time. This morning when I woke up I thought it might be a fun, and perhaps impressive way of presenting the materials on the iPad. After all I had created them in Pages and KeyNote. But after I jumped through the ridiculous hoops one has to pass through to get them on the iPad, I realized that this was a bone headed idea.

After looking at the presentation on the iPad, I realized that no matter how sexy the device may be and how fun it might be to present this way, any benefit would quickly be wiped away once the screen went dark and those fingerprints magically appeared. Sure, I could wipe the screen clear before I started, but the beauty of presenting things this way is that the donor could swipe through the different screens leaving their own mark on the iPad.  In addition these kind of meetings are typically filled with conversations that can be lengthy between one slide and the next, allowing for the screen to black out.

So, in the end I decided to stick with paper instead of pulling out the shiny new device. I just couldn’t risk making a negative impression or taking the time to explain how the magic oleophobic screen worked.

One of these days we have to come up with a better way.

On a more positive note. I picked up an InCase sleeve/case for the iPad this weekend. Unbeknownst to me, the soft interior of the case does an excellent job of cleaning the iPad screen of fingerprints after it gets toted around for awhile.
Other Posts In This Series