Yes, AT&T fumbled the ball today, again! I am the guy who wrote the reasoned article about being patient as you wait for your phone to activate, because like my first activation it should only take about 10-20 minutes and you’ll be done. Then I tried activating my second phone. Now at 6PM, after getting the first one activated before 10 AM as I began writing this post, I am still waiting. What’s worse, you have to keep hitting next and entering your zip code and last four digits of your Social Security number over and over and over again! 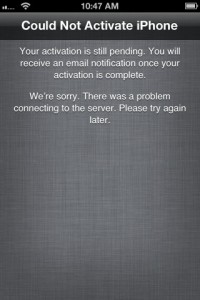 In comparison, I recently reviewed the new $79 Amazon Kindle. Amazon gave me the “Apple out of box experience”. I opened it up and it was already configured and ready go. In fact it welcomed me with my name. I know that a Kindle and a phone are different animals. To activate my phone, AT&T must also turn off my old phone if I’m upgrading. That would make some people pretty mad if their phone turned off and they didn’t have access to their new one till the UPS or FedEx guy showed up.

I get that we have to activate after getting our phones. I just wish the would make it a little more enjoyable on high traffic days like this. Rent out some extra servers from someone. It’s more complicated than that, but it seems Verizon and Sprint handled this well. They seemed to handle the pre-order too, something AT&T couldn’t muster.

AT&T’s store wasn’t any help either. I’m using my oldest son’s eligibility for an upgrade. So I knew I had to swap phones on our account after activation. When my iPhone 4S wouldn’t activate, I took it to AT&T to handle both. The poor sales clerk tried, but she couldn’t do a thing either.

I suggest that you try to activate over Wi-Fi and not over 3G. I kept retrying activation while driving to and from the store and nothing. Finally, ten minutes after getting home and within range of Wi-Fi, it worked. Could be just a coincidence, but I offer it as a possible assistance to anyone else just as frustrated as I had become.

By the way, I asked Siri just now why AT&T is so bad, as per Warner’s suggestion. She answered that she couldn’t do that.

And neither can they!