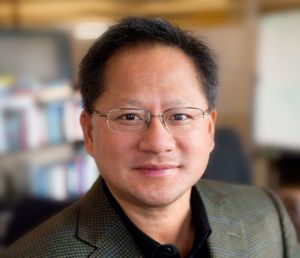 This week is the Netbook Summit, where lots of folks with an interest in Netbooks will gather and talk about, well, Netbooks. I think that’s the agenda. But I’m guessing Tablets and Slates will be on their mind as well, seeing as some folks think that the iPad is the beginning of the end of Netbooks.

NVIDIA CEO Jen-Hsun Huang knows that he has a lot of folks paying attention to what his company is doing with the Tegra platform and what it offers for Netbooks, Tablets, and mobile phones. Laptop Mag has a pre-conference interview with Jen-Hsun Huang in which he says he doesn’t see Tablet/Slates killing off Netbooks but instead sees the two devices merging in the future to form a class of leisure computers.

It’s a far ranging interview with lots of CEO speak that hedges some bets around the edges, but it is an interesting glimpse into what we might hear from NVIDIA in the next few days. Intriguingly when asked about the Tegra Tablet vs. the iPad he offers a lot of “hope:”

I think that hoping comes from the fact that NVIDIA has to depend on partners to make that hoping turn into a reality.