NVIDIA Reveals Tegra 3+ Coming This Year, 4G LTE Support May Not Happen Until 2013

While Tegra 3 chipset barely debuted on smartphones at Mobile World Congress in late February, NVIDIA is looking to release a slightly upgraded model of its quad-core ‘4+1‘ architecture ARM-based applications processor by the end of this year in the form of the Tegra 3+. Unfortunately, though, for those looking for a high-end phone with fast 4G LTE mobile broadband support, may have to wait until early 2013 before that will happen as Tegra 3+, like the Tegra 3 predecessor, will lack support for LTE. With Tegra 3, manufacturers like HTC, which uses the Tegra 3 on its international phones, have to resort to using dual-core Snapdragon S4 processors from Qualcomm for devices released in the U.S. as the Snadpragon CPU offers better compatibility with U.S. carriers’ 4G LTE networks. 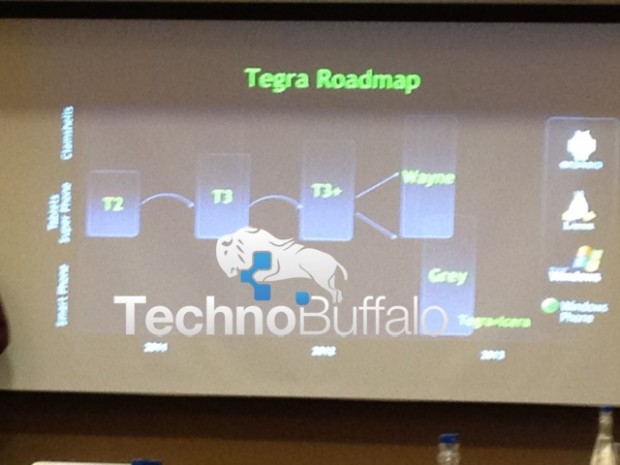 Rumors of a new Tegra 3+ arriving sometime later this year was reported by TechnoBuffalo and shortly after it looks like NVIDIA’s Michael Rayfield had confirmed the leaked slide.

However, there is still hope for LTE and Tegra 3 and Tegra 3+ at this time through external partnerships that NVIDIA has with other companies. The news just means that an NVIDIA applications processor that integrates the company’s GeForce graphics engine along with a mobile broadband radio won’t happen until early next year.

NVIDIA will have some competition in the market for fast applications processors. Recent newcomer Huawei had released its own K3V2 CPU that’s a quad-core model. In addition, it’s unclear if Samsung’s quad-core Exynos CPU will offer compatibility with LTE networks at the onset, and Qualcomm’s current dual-core Snapdragon S4 chipset is posting some great performance in benchmark tests.