While there’s no shortage of Android tablets these days, NVIDIA has a new option they hope will capture gamers around the word, as well as regular tablet buyers. This morning, NVIDIA announced a brand new Android 4.4 KitKat device called the NVIDIA Shield Tablet. Lately all the talk has been on the upcoming Nexus 8 or the iPad Air 2, but NVIDIA beat them both to the punch this summer with a brand new high end 8-inch Android tablet.

Building on the success and launch of the NVIDIA Shield Portable game console last year, the new NVIDIA Shield Tablet aims to offer an excellent stock Android tablet experience for all users, as well as deliver top-tier gaming performance unlike any other tablet to date.

Unlike Samsung which is a household name know for their smartphones and tablets, NVIDIA is a popular PC graphics manufacturer, but lately they’ve been diving deeper into the mobile space with Android gaming and devices. The SHIELD last year was essentially an Xbox controller with built-in speakers and a 5-inch 720p HD display meant for gaming on the go, or streaming PC titles to your handheld while you play from anywhere in your home. The Shield tablet aims to offer that and more.

NVIDIA’s Shield Tablet delivers the same stock Android 4.4 KitKat experience most users enjoy from the Nexus 7 and the upcoming Nexus 8, but with a few added benefits and tweaks geared for performance, gaming, and overall usability. 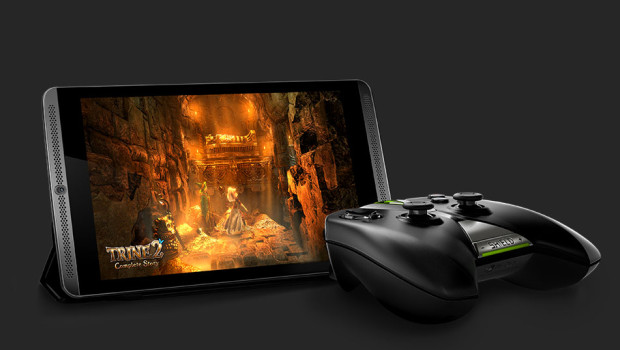 Last year NVIDIA released its first tablet, the NVIDIA Tegra Note 7, which was a budget-friendly tablet built for gaming but overall it wasn’t very successful. Offering specs lower than most of the competition for a similar price point. In 2014 though, NVIDIA’s new SHIELD Tablet delivers all around, and does so at a wallet friendly price.

The NVIDIA Shield Tablet offers a bright and stunning 8-inch 1920 x 1080p full HD display, and is powered by the company’s brand new NVIDIA K1 192-core mobile processor. Essentially this is a premium 2.2 GHz quad-core processor with 2GB of RAM, 192 GPU cores capable of console-quality gaming, and it will come with two storage options. Either a 16GB model, or a 32GB+4G LTE variant.

Wrapped in a lightweight plastic shell the SHIELD tablet comes equipped with dual front facing speakers with PureAudio technology and dual-bass reflex ports around back to deliver great sound. Whether you’re listening for footsteps while gaming, or enjoying movies o the full HD display from Netflix while using the included tri-fold case and kickstand. Check it out yourself.

The NVIDIA Shield Tablet is surely aimed at gamers with the impressive specs mentioned above, but that isn’t the only thing this Android tablet can do. Running nearly stock Android 4.4 KitKat with a few tweaks for NVIDIA’s TegraZone full of apps and games, this is a stock tablet similar to the Nexus 7. NVIDIA added a Stylus for content creation, mini HDMI-out to stream games to the big screen, and a micro-SD slot to offer up to 128GB of additional storage space.

Finally, like most Android tablets these days, users and prospective buyers will be happy to see a 5 megapixel camera on both the front and rear of the device. 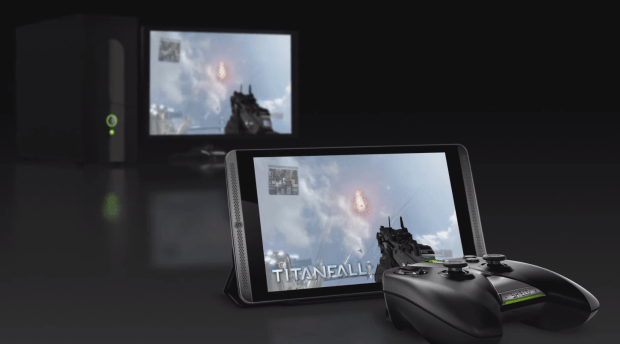 Now that the regular Android tablet details and top-tier specs are out of the way, buyers will also want to know what else this tablet offers that the competition doesn’t. Powered by NVIDIA GameStream owners can stream full console and PC-quality titles like TitanFall, Batman, or even Crysis right to the tablet from the cloud, or from their own PC. Meaning you can play PC games anywhere and everywhere. Even from your couch or the toilet.

Twitch and NVIDIA ShadowPlay has also been integrated into the SHIELD Tablet, allowing gamers to record and stream live gameplay to friends and fellow gamers. Then last but certainly not least is the NVIDIA SHIELD Controller, which uses WiFi direct to instantly sync and control the new tablet. Using the built-in kickstand users can prop up the 8-inch tablet and game with a dedicated game controller, or set the Shield Tablet into console mode. Console mode transforms the tablet into a full living room experience and streams natively at 1080p full HD resolution. Offering movie streaming from Netflix, gameplay, and nearly anything else you’d like to mirror from your tablet to the living room TV.

The SHIELD Tablet and SHIELD Controller will be available starting July 29, starting at the price of just $299 for the 16GB WiFi model. The 32GB 4G LTE option retails for $399 and is unlocked so will work with AT&T or T-Mobile 4G LTE. And finally the new SHIELD Controller is just $39.

Again, while the new SHIELD Tablet is obviously geared for gamers this is still an all around excellent Android tablet delivering top-tier specs, the latest version of Android, and stunning performance all for a competitive price of $299.