During a recent investor’s meeting NVIDIA showed a video detailing the graphical capabilities of next-generation Tegra processors with Kepler technology, and VentureBeat managed to grab a short video of the presentation.

The video compares the graphics of the current fourth generation iPad to the Kepler graphics NVIDIA will bring to its next generation of Tegra processors code-named Logan. The difference between the two devices is stunning. It’s almost hard to believe that in less than two years graphics power can jump that much.

The iPad section of the demo shows a first-person view of an apartment with some furniture and plants placed around the few rooms. The graphics look nice, but objects lack detail and there are a lot of rough edges. As NVIDIA CEO Jen-Hsung Huang points out, many are happy with such graphics, even if they aren’t as great as PCs or consoles.

The section of the Tegra processor with Kepler architecture, however, features much more detail. The section shows a modern military first-person shooter that looks like a slightly scaled down version of Battlefield 3. The video has numerous soldiers walking around the small area with detailed uniforms and guns, as well as a few vehicles. 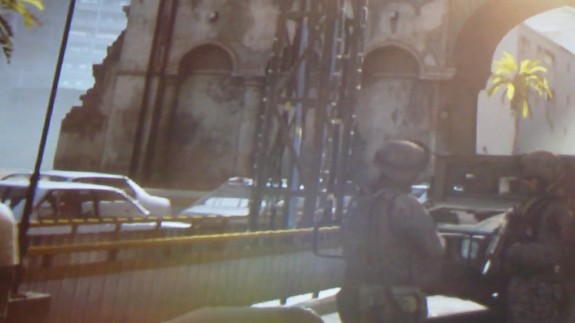 The video also shows new lighting and particle effects, including high-dynamic range lighting, all running off a mobile processor.

The graphics from the next generation processors still aren’t as great as PC or console graphics (especially not the game Sony showed at its PlayStation 4 launch), but they’re still a big leap. NVIDIA’s Logan Tegra chips will likely make their way into the second generation of Project Shield,or tablets and smartphones late next year. That means there’s still some time to make them even better for mobile gaming.

If nothing else, NVIDIA’s short video demo shows that pretty soon mobile graphics will stop looking like “vintage 1999” games and more like current console and PC games. With the relatively slow console cycle, perhaps future Tegra chips can match the PlayStation 4 and Durango before their successors reach the market.