It looks like Qualcomm may be losing its monopoly on supplying chips to Microsoft’s Windows Phone platform if a leaked NVIDIA slide is to be believed. According to the NVIDIA roadmap, the company’s Tegra processor will make it onto Windows Phone by 2013, and that chip design will be codenamed Grey.

Grey, which will combine Tegra with Icera, will be the first chipset from NVIDIA that would combine processing power, graphics, and mobile communications on a single chipset. The chip will be manufactured using a 28 nm process and will come with 2G/3G/4G capabilities, matching Qualcomm’s SoC. 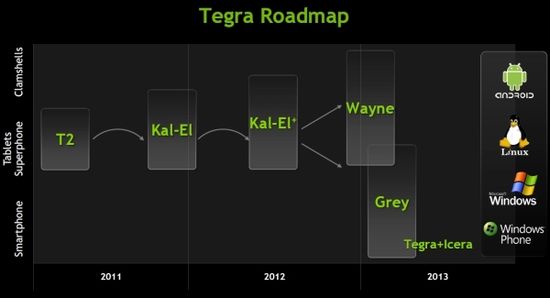 To date, however, Microsoft had standardized its Windows Phone reference design around Qualcomm’s ARM Snapdragon chipset. As Microsoft is beginning to cozy up with ARM on its Windows 8 tablets, it’s unclear still if other ARM manufacturers, including Texas Instruments, will be allowed into the Windows Phone ecosystem.

What’s interesting is that the Tegra roadmap lists both Windows Phone and Windows, suggesting that there may be some convergence and similarities between the two operating systems in the future.