NVIDIA's Kai Platform to Bring Quad-Core Tablets Down to $199

NVIDIA has created the Kai reference platform to help tablet manufacturers bring down the price of their tablets to $199 starting this summer, which is the same price that Amazon is selling its show-stealing Amazon Kindle Fire. According to NVIDIA, this will help to drive the price of quad-core tablets down to the price of the Kindle Fire, which is a dual-core device. Kai, which is based around NVIDIA’s popular Tegra 3 ‘4+1’ architecture, will allow developers to leverage some of the power of Tegra 3 without the added costs:

Our strategy on Android is simply to enable quad-core tablets running Android Ice Cream Sandwich to be developed and brought out to market at the $199 price point, and the way we do that is a platform we’ve developed called Kai. So this uses a lot of the secret sauce that’s inside Tegra 3 to allow you to develop a tablet at a much lower cost, by using a lot of innovation that we’ve developed to reduce the power that’s used by the display and use lower cost components within the tablet. 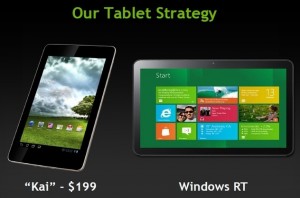 According to The Verge, NVIDIA says that Kai devices are coming soon and that “customers are using the Kai platform to build Tegra 3 tablets now.”

At this point, it’s unclear if Kai will remain as a reference platform only or if it will get commercialized. We’re already seeing low-cost tablets and hearing lots of rumors about a low cost quad-core Android tablet from Google as well. One device, which was introduced at this year’s Consumer Electronics Show, is the $250 Asus ME370T tablet, which is a quad-core 7-inch slate. Asus and Google are also rumored to be teaming up to build a $150-$250 Nexus Tablet.