NVIDIA has just sent out media invitations to the company’s press event centered at Mobile World Congress later this month in Barcelona, Spain, which promises some quad-core firsts. As the company had worked with partner Asus recently to launch the world’s first quad-core ARM-based tablet in the form of the Transformer Prime, that leaves room for smartphones. In the past, NVIDIA had promised that quad-core phones will begin arriving in 2012, and so it is likely that the ARM-based chip-maker will use MWC to launch quad-core phones. 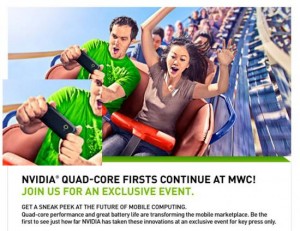 Several phone-makers are expected to launch quad-core phones at Mobile World Congress, including HTC. In fact, the press invitation has a graphics that shows a user holding a phone that appears at a glance to resemble the HTC Droid Incredible 2 on Verizon Wireless. HTC is rumored to be launching the HTC Edge/Endeavor Android phone with quad-core processing at MWC, migrating away from the exclusive use of Qualcomm chipset on the company’s smartphones.

Samsung, which was originally expected to either launch a powerful dual-core Galaxy S III or a quad-core phone, is now pulling the announcement of its third-generation flagship smartphone from the industry event.

2012 will see the emergence of quad-core smartphones and tablets, especially on Android and Windows 8, but there will still be a number of dual-core models in play. Most recent speculations surrounding Apple’s A6 processor that may be headed to the iPad 3 suggests that Apple may be releasing a more powerful dual-core chipset with much improved graphics rather than going to a quad-core model. For quad-core to really take off, applications developers and software must first be able to leverage the added processing power for users to really see the gains of upgrading to a more feature-rich processor. Additionally, with technologies like 4G LTE already vying with processing power for battery life, manufacturers will have to make compromises to deliver the best user experience.