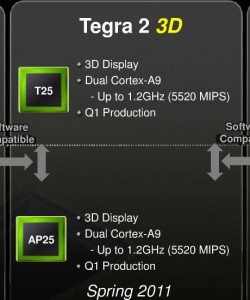 With 3D displays and screens still attracting a lot of attention, especially on the smaller screen, NVIDIA is positioning itself to capitalize on the emerging market with its mobile chipsets. The dual-core ARM Cortex A9-based Tegra 2 will add 3D capabilities come this Spring according to a leaked slide from Tech Eye. The company’s Tegra 2 chipset also increases its performance from dual-core gigahertz computing power to 1.2 GHz per core and also adds support for Chromium OS support, making it a contender for Google’s netbooks against the Intel Atom-based CPU.

The 3D Tegra 2 is called the T25. Mass production is slated for the first quarter of this year with availability coming this spring. Perhaps Sharp will implement this 3D-capable technology along with its glasses-free screens on its next revision of Android Galapagos smartphones.