NY Times to Battle The Daily News App with News.me 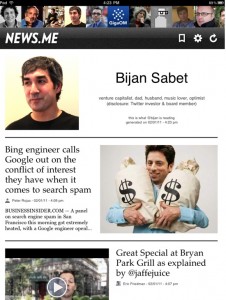 The New York Times will soon be launching its own daily news app to compete with News Corp.’s The Daily app, which will be a daily newspaper designed specifically for the iPad and may launch Apple’s subscription plan for periodicals and magazines. The New York Times competing version will be called News.me and will differentiate itself from The Daily with social media and social networking functionality.

TechCrunch, which has had some time with the app, is reporting that the efforts put forward by the New York Times “won’t look anything like the The Daily.” In fact, News.me will be more geared towards social sharing:

News.me is a social news reading app that presents the news that the people you follow on Twitter are reading, and filters it based on how many times those stories are shared and clicked on overall. It pulls in data from not only Twitter but also bit.ly, the betaworks company that shortens billions of shared links every month.In contrast, The Daily will produce its own articles and videos with a staff of 100 journalists. It is not clear how many social features will be included in The Daily, but the emphasis seems to be more on the original content.

News.me is similar to a third-party app called Flipboard, which displays news feeds in a visual manner like a living, organic magazine. With News.com, you log in with a Twitter account, and you’ll begin to see news stories that are being shared, tweeted, and retweeted by people you follow. Rather than seeing embedded hyperlinks, users will get to see a visual display of the link as a news story with embedded photos and videos, similar to Flipboard.

The concept is different from what TechCrunch is describing as the New York Times won’t be creating content for this daily app, but will be allowing users to essentially curate their content and aggregate it from sources they know and follow on social networks. This will give more personalized news streams that may be more relevant to the reader.