Obama’s first run for President was noteworthy because the then Presidential candidate had a forward view on technology and was seen toting around a BlackBerry and other gadgets along the campaign trail. Obama’s forward thinking will continue with his re-election campaign and the President’s staff will be utilizing Square to accept campaign contributions. The module will be used in conjunction with Android phones, Apple’s iPhone, and Apple’s iPad. 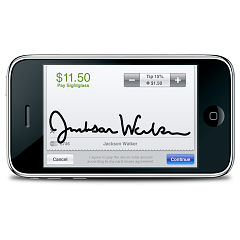 The process will hopefully help to not only eliminate paper waste, but help campaign staff  do less work as Square can generate reports. Donors will also be issued an immediate receipt either via email or text message. Accurate paperwork and accounting still will be par for the course per campaign contribution rules, and hopefully all that will get streamlined with Square.

As Square assesses a fee for transactions of 2.75 percent, Obama’s campaign may help give Square a boost as well. The Obama team was able to raise $42 million in the fourth quarter of 2011.

At the end of 2011, Square’s high-profile non-profit client was the Salvation Army, which used the platform to collect donations around the holidays.

In addition to Square, there are other merchant services available as well.