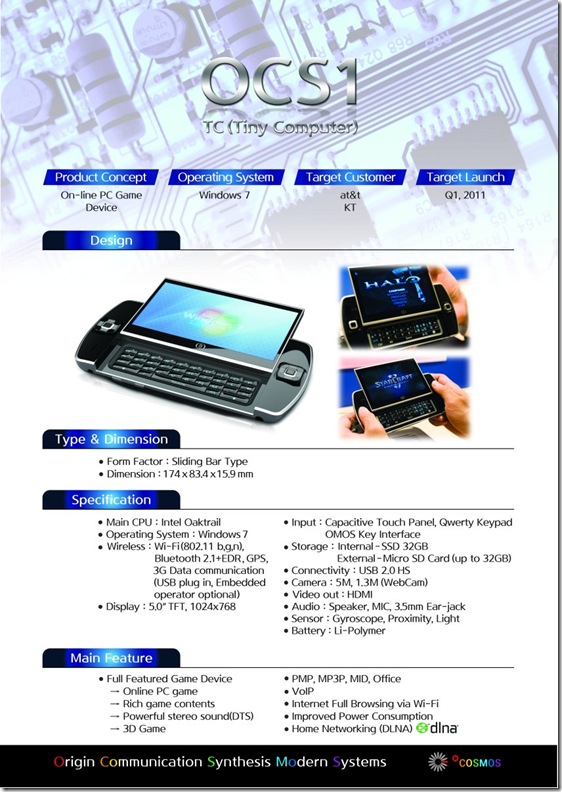 The OCOSMOS OCS1 is a UMPC, otherwise known as an ultra-mobile PC, which was a category of mobile computing devices that Microsoft had hoped would gain traction before the iPad consumer tablet craze. The OCS1 has a 5-inch touchscreen and a small form factor that runs the full version of Windows 7, making it a diminutive tablet. Also, OCS1 has a landscape oriented sliding keyboard with directional pads that flank both the left and right hand edges of the screen, making its form factor suitable for gaming on the go, though you may be limited to whatever games would run on an Intel Atom-based single-core Oak Trail processor clocked at either 1.5 GHz or 1.9 GHz.

Success as a gaming device also depends on easy access to games. With integrated WiFi, Bluetooth, and 3G mobile broadband access, the OCS1 may get easy access, but until a Windows apps store emerges, the OCS1 may only be a casual, limited gaming device. Like other tablets and phones, the device has a proximity sensor, light sensor, and gyroscope, in addition to a USB 2.0 port.

Though the 5-inch screen is similar in size to Dell’s Android-powered Streak, this Windows 7 powerhouse will host a higher resolution 1024 X 768 display that’s capable of rendering 720p HD content via the integrated 400 MHz GPU.