Following years of speculation, and the release of Office for iPhone just a few months ago, Microsoft is finally bringing its suite of productivity applications to Android users with Office for Android.

Starting immediately, users will be able to edit their Microsoft Word documents, Microsoft PowerPoint presentations, and Microsoft Excel spreadsheets for their Android devices. All told, the experience isn’t that far from what Windows Phone 8 users get inside that platform’s native Office Hub.

SkyDrive, SkyDrive Pro and Office 365 users will be able to open all the documents they have stored on the service using the applications greeting experience. From there, users will also be able to create new documents and have them save to Microsoft’s SkyDrive and SkyDrive Pro. 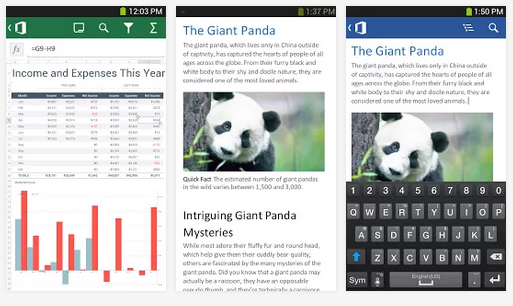 Unfortunately, just as with Office for iPhone, Office for Android will require users to sign up for an Office 365 account. With a subscription users can install the desktop version of the entire Office suite on up to 5 Macs and PCs. Users are also able to install mobile versions of Office on up to five mobile devices as part of that subscription as well.

For that price, Microsoft will add 20GB of storage to the user’s SkyDrive account and allow them 60 minutes of Skype calling time per month. While all of those are useful things to have if a user already relies on those services, it’s $99.99 a year price tag might be a little too steep for some users. Microsoft also offers users to choose a $9.99 monthly subscription instead of an annual payments.

Office for Android won’t work on Android tablets. That restriction mirrors the moves Microsoft made to limit Office for iOS to just the iPhone. Limiting Office’s reach on tablets is clearly meant to position its own Surface RT tablet as a better alternative to Android tablets and the iPad. The Surface RT actually ships with a free copy of Microsoft Office.

Microsoft says that although Office for Android is available in the Google Play Store, it hasn’t yet rolled out to all customers. Today, it’s available in the United States only, however it’ll begin rolling out to international markets soon.