Microsoft made the announcement moments after new CEO Satya Nadella took the stage at a press event in San Francisco. Nadella wasted no time declaring his Microsoft to be a more mobile and cloud focuses company than the Microsoft that former CEOs Steve Ballmer and Bill Gates. Nadella also spent some time explicitly talking vaguely about the company’s plans for the future.

Native versions of Word, Excel and PowerPoint are all included in the application. The company’s presentation made it clear that it worked hard to honor Apple’s design guidelines while making sure that Office 2013 users will find the interface familiar. Office for iPad also includes support for co-authoring and collaborations.  Office for iPad is free, however users will need to subscribe to Office 365 to create new documents. Office 365 costs users $9.99 a month or $99.99 a year for five different PCs. There’s now a cheaper $6.99 a month offering that allows users to install Office on just one PC or Mac, a phone and a tablet. 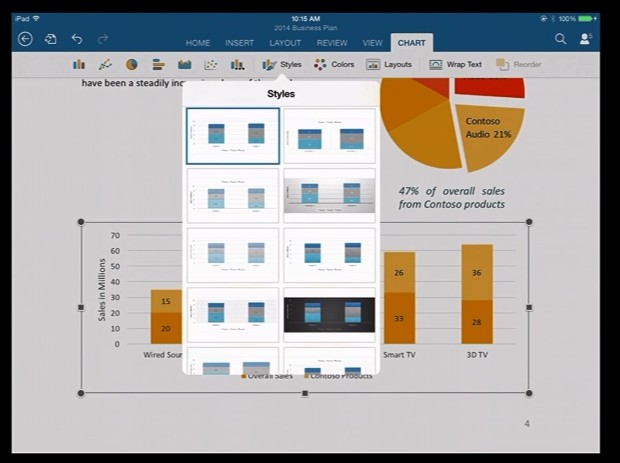 Today’s announcements came after almost two full years of speculation. Before today, most assumed that Microsoft would hold off on introducing Office for iPad until it had something more concrete to convince users that buying a Surface tablet or 2-in-1 running its Windows operating system was better for them. Fortunately for iPad users, that thinking seems to have changed under Nadella. Office for iPad makes its debut before a native Windows Store version of Office. Today, only a severely restricted version of OneNote is available to Windows 8 users without opening the desktop.

Naturally, the question now becomes why anyone would want to purchase a Surface or low-end Windows 8 tablet when Microsoft has now introduced Office for iPad. Microsoft makes desktop versions of Microsoft Office 2013 available on low-end Windows 8 devices absolutely free of charge. Perhaps Microsoft is hoping that Office on iPad will put more of a spotlight on this feature. Of course, it’s also possible that Microsoft is simply looking to make its software products available wherever it feels they’re needed.

It’s a different world, one where software, services and hardware work together to create a cohesive ecosystem. Until fairly recently Microsoft treated its desktop software as bait to get users on its own operating systems. It’ll be interesting to see where the trend takes them.

Microsoft hasn’t yet announced any plans to bring Office to Android tablets, however there is a smartphone app for Android users.