Surprisingly, that didn’t take long. Microsoft released the long awaited Office for iPad Apps not much more than a month ago. Today it is out with an update for the iPad versions of Word, Excel, and Powerpoint, that among other things, gives users the ability to print documents. If you have been following the story that might seem odd, but the initial release of the Apps did not include printing functionality, which most thought was an odd omission. That’s been corrected as of a new round of updates for Word, Excel, and Powerpoint for the iPad. 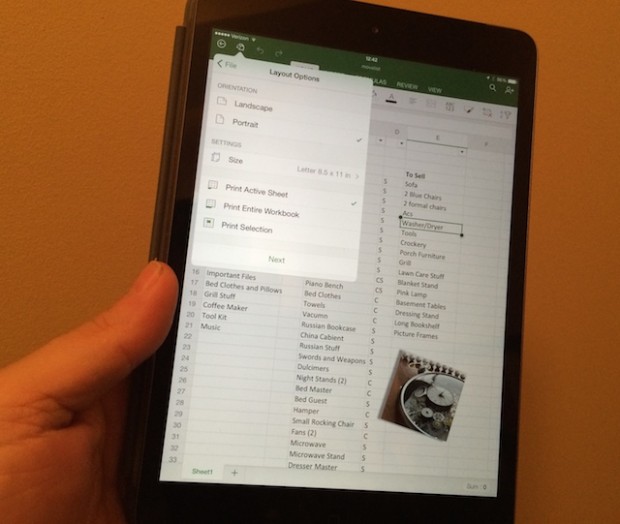 The big question users might be asking is if they need to purchase an Office 365 subscription to take advantage of this new print capability. According to the Office Blogs the answer is you can print from the free Apps.

You can read Word documents, view Excel data, present with PowerPoint, and print your documents with the free iPad apps. With an eligible Office 365 subscription1 starting at $6.99 per month, you can edit and create documents on the iPad, use Office for your PC and Mac®, and get many other benefits.

In addition to the much requested printing feature Microsoft also added SmartGuides to help you better align objects in Powerpoint and AutoFit for Excel, which helps you adjust the width or height of multiple columns or rows simultaneously.

The printing feature will capture all of the big attention for this update. When the Office Apps for the iPad were first released, Microsoft did some surprisingly bad spin about why printing wasn’t included. Microsoft’s General Manager for Office Marketing, Julia White, was quoted about this omission as saying  printing is “an inferior mode of communication.” Granted there are many circumstances when we don’t need to print documents the way we used to in order to communicate with others in today’s digital age, but there are still quite a few Microsoft Office users who rely on hard copies.

While waiting for printing capability to be added by Microsoft, users discovered there were other options to print Office documents from the iPad.

Read: How to Print Office for the iPad Documents

The Microsoft Office Apps for the iPad are not as full featured as you will find on desktop versions of the Office software. That goes the same for this printing functionality. As an example, there is no Print Preview option. While not as fully featured as printing features users do get some control to print their documents.

That said, printing works with any AirPrint capable printer. That means you can also print to services such as Dropbox or Evernote via utilities such as Printopia. 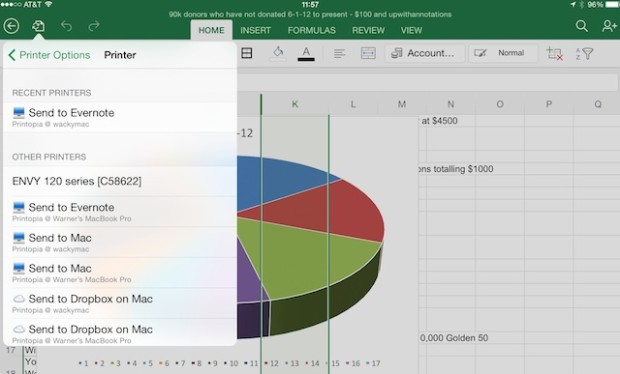 You access the printer controls via the File icon on the top layer of the ribbon in each of the Apps. 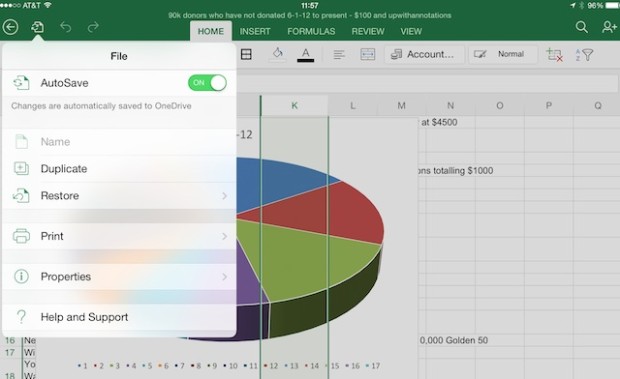 Again, the good news for those who only use the free Office Apps to view documents is that you can print those documents. So, if someone emails you a report or document, you could view it and then print it out directly from your iPad.

When Microsoft finally released Office for the iPad 33 days ago all of the Apps were free for the downloading. To use Word, Excel, and Powerpoint to create documents on an iPad, users need to subscribe to Office 365. When the new Apps were released only the full or Home version was available for $99.99 per year or $9.99 per month. With the announcement on the Office Blogs, Microsoft is now prominently mentioning the newer Personal Edition of Office 365 which costs $6.99 a month or $69.99 per year.

The Personal Edition of Office 365 allows you to use Office on one computer (Mac or PC) and one tablet. The Home Edition allows you to use Office on up to five computers or tablets. There is also a student version called Office 365 University that costs $79.99 for a four year subscription. In addition to using Office on more than one computer, Office 365 subscribers also receive updates to the Office software products as they become available and 25GB of OneDrive storage, along with 60 minutes of Skype calling per month.

For the iPad versions of the Apps documents are stored and retrieved from OneDrive, although you can save them locally to an iPad.

Microsoft OneNote for the iPad is also available and preceded the big three Office Apps to that platform, but as yet it has no printing capability.

Read: OneNote for iPad Review: Missing Too Many Notes

Nor is there currently the capability of Printing from Word, Excel, or Powerpoint to OneNote. This isn’t surprising as Microsoft OneNote is the weakest iPad version of the Office Apps currently available. Perhaps one day.

If you’ve installed Word, Excel, or Powerpoint the update should be available via the App Store. If you are looking to install the Office Apps for the iPad for the first time, note that there is no combined suite of Apps and you need to download each App: Word, Excel, Powerpoint, OneNote, depending on your needs.