Windows RT users will get a new way to manage their contacts, check email and monitor their upcoming event calendar when they update to Windows 8.1 this year thanks to Outlook 2013.

The announcement, which capped off festivities at Microsoft’s TechEd event for IT administrators and business users, means that any tablet powered by Microsoft Windows RT operating system will get a copy of Outlook that’s native to that operating system. Right now, these devices already come with Office 2013 RT applications. These include Word, PowerPoint, Excel and OneNote. 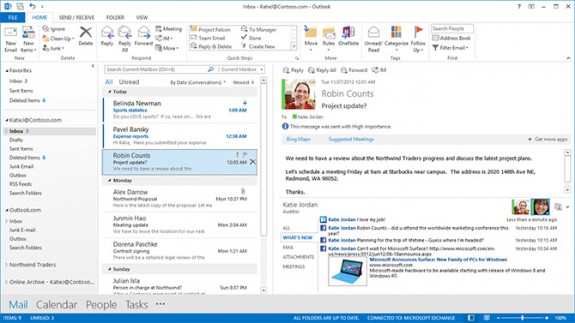 Just as the rest of the Office 2013 RT applications do today, Outlook 2013 RT will be a Desktop application and as such will look identical to the version that’s currently available to users on Windows Vista, Windows 7 and Windows 8.

While the announcement will certainly come as good news to users of Windows RT Devices, which currently consists mostly of Microsoft’s own Surface RT users, the arrival of Outlook 2013 RT comes at a pretty awkward time in Microsoft’s transition.

Windows RT is the operating system that is built to natively run on ARM system-on-a-chip architectures –think iPad and smartphone processors and form factors, Microsoft announced last year that it would not allow users to install desktop applications on any Windows RT device, period. However, as the company is only at the beginning of its own plans to build out the Metro environment, it’s only released one Metro Office application, OneNote.

If Microsoft hopes for users to adopt the Windows Store and the apps that fill it in any meaningful way, it’ll need to push more powerful and productive Metro applications that can be used for getting things done. In today’s announcements, Microsoft quoted a recent study by Morgan Stanly that found that 61% of all users buying tablets consider Office to be the most important feature they are looking for.

With that in mind it would seem that Outlook would have been a perfect place to start getting users to take productivity in Metro applications seriously. Though, admittedly, a desktop application for these users is at least progress.

Microsoft plans to make a preview version of Windows 8.1 available to users on June 26th during its BUILD conference.