In the continuing battle that is all about productivity work on the web, Microsoft’s Office Web Apps  (Word, Excel, Powerpoint and OneNote) have been viewed as web companions that users could access from a browser but Apps that lacked features already achieved by Google Drive/Docs. That changed a bit last week when Microsoft rolled out real time collaboration and a rich UI for Word, Excel, and Powerpoint. With the new collaboration features users can now edit documents in real time with many of the common features found in Office Apps on the desktop. In addition Microsoft has provided a rich, touch friendly web UI that resembles the familiar ribbon Office users are accustomed to. And this isn’t just for users on a Microsoft platform. Office Web Apps with these collaboration features will work in any browser on any platform. For example, in Safari on an iPad, or Chrome on a MacBook. And of course this would work on a Chromebook. 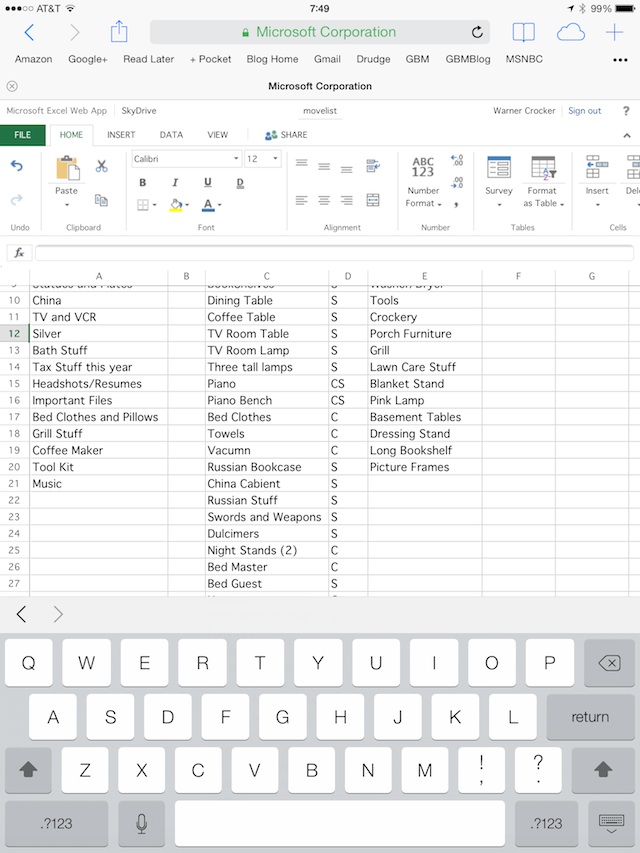 Microsoft Excel in Safari on the iPad Air

The real time collaboration features are available in Word, Excel, and Powerpoint (not OneNote.) Users can see and follow who is working on a document. All input and edits are automatically saved as you work.  If a member of your collaborative team isn’t available for a real time session he or she could edit the document later online or offline. If offline, any changes would be reflected in the online document once it was saved locally and then that user connected to the Internet.

The Office Web Apps now bring a familiar desktop look and some of the features to the browser experience. The feature set is still not a full Office experience but the most common features are available from the familiar ribbon interface. Microsoft made some changes to the individual web apps themselves. You can now do a find and replace in Word and also insert headers and footers. Excel users can now drag and drop cells and reorder sheets. In Powerpoint you can now crop photos from within the Web App. An unlimited number of users can work simultaneously on Word and Excel documents. Powerpoint is limited to 20 simultaneous users.

I did some limited testing of  the Office Web Apps over the weekend and things seem to work as advertised. I was using a Microsoft Surface 2, an iPad Air and a MacBook Pro. That’s four different browsers: Internet Explorer, Safari, and Firefox and Chrome on the MacBook Pro. I had success in every combination, although the testing using Safari on the iPad Air crashed a couple of times. On the iPad Air and the Surface 2, the Apps are indeed Touch friendly, although I had more success using Touch on the iPad Air than I did on the Surface 2. In all cases text input flowed smoothly. Trying to resize a photo in Powerpoint showed some lag, which isn’t unexpected. 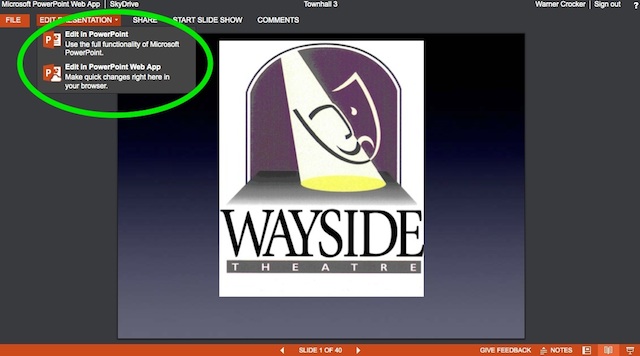 Powerpoint Web App running in the browser on Surface RT

Once you’ve logged in and received access to the files you’re working on or creating you are given a choice of editing the document in the Office Web App or using the local App. Choose the Web App and the familiar ribbon UI shows up in the browser on your screen. 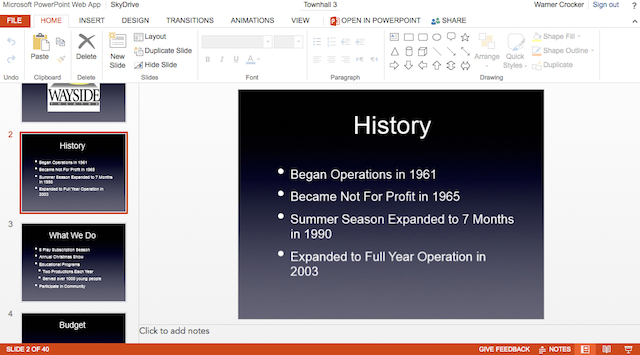 Google Docs/Google Drive has had a real time collaboration feature for some time now. Many of the collaboration features will feel familiar to users of that platform. There is a real battle going on when it comes to gaining and/or keeping users between Microsoft, Google, and Apple. Being able to open, edit, and collaborate in real time brings Microsoft and Google to the same level with that feature set, with Apple lagging behind. All three Office suites can be accessed through the browser now, but only Microsoft and Google offer real time collaboration.

Will this be a boon for teams working collaboratively in Office? That’s tough to gauge. I know quite a few folks who swear by the collaborative features in Google Docs. But as we continue to see advances that strip away much of what we thought was necessary to get work done it is certainly nice to have these lighter weight options available.