Office Web Apps, the online version of Microsoft’s Office desktop apps, have just gotten a makeover and they may provide the best look yet of what users should want when Microsoft finally releases Windows Store versions.

Microsoft formally announced new versions of Office Web Apps late yesterday after the update’s refreshed navigation and stark contrasting colors began appearing randomly for average users. In all fairness, Office Web Apps already sported a brightly colored contrasting interface. However, the newly updated Word, Excel, PowerPoint and OneNote apps all drop the last bit of shadows and gradients that were left after Microsoft updated them to match the Windows desktop version of Office 2013. 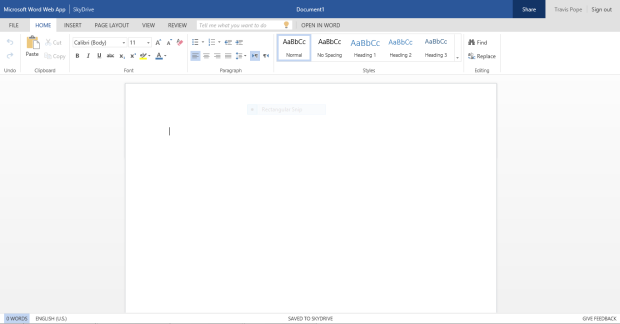 The newly updated design of the Office Web Apps.

Each app now sports a refined color-coded navigation menu that separates sharing and account options from the rest of the Office interface. Microsoft hasn’t ditched all the icons users are familiar with; they’ve just made them slightly more muted.

The company also used the opportunity to add Footnotes and Endnotes functionality to the Word Office Web app and support for voice dictation using the Microsoft-owned Tell Me voice service.

While the company normally updates the Office Web Apps aggressively, it’s this user interface that’s drawing the most attention. That’s because while the new Windows Store and app platform have been available for over a year, there aren’t yet Windows Store versions of many Office apps. That’s a pretty big omission since Microsoft Office remains one of the most used desktop applications in the world. Unleashing Windows Store versions of Office could make it easier for casual Windows users to finally let go of the Desktop interface.

Most reports have compared these updated apps to the Start Screen in Windows itself, but their design closely resembles OneNote MX, the Windows Store version of Microsoft’s OneNote note taking application. To be clear, Microsoft hasn’t said they’ll be taking their inspiration for Windows Store Office apps from the Office Web Apps, however it wouldn’t necessarily be the worst idea.

The updated versions of the Office Web Apps are available for anyone to use on Microsoft’s SkyDrive website. That includes Android tablet and iPad users as well as users of Windows and Windows RT devices. There are no charges related to using the Office Web Apps either.