Google announced today that it has acquired Nest Labs, the start up famous for the Nest thermostats that let you control your domicile’s temperature via your mobile device or the web. Nest has recently branched out into smoke and carbon monoxide detectors as well. Nest Labs was acquired by Google for $3.2 billion in cash. Here’s an excerpt from a statement from Google: 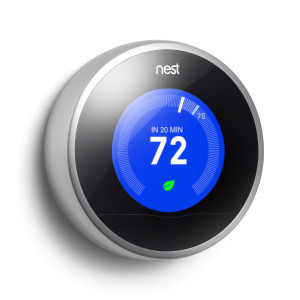 Nest’s mission is to reinvent unloved but important devices in the home such as thermostats and smoke alarms. Since its launch in 2011, the Nest Learning Thermostat has been a consistent best seller–and the recently launched Protect (Smoke + CO Alarm) has had rave reviews.

Larry Page, CEO of Google, said: “Nest’s founders, Tony Fadell and Matt Rogers, have built a tremendous team that we are excited to welcome into the Google family. They’re already delivering amazing products you can buy right now–thermostats that save energy and smoke/CO alarms that can help keep your family safe. We are excited to bring great experiences to more homes in more countries and fulfill their dreams!”

Tony Fadell, CEO of Nest, said: “We’re thrilled to join Google. With their support, Nest will be even better placed to build simple, thoughtful devices that make life easier at home, and that have a positive impact on the world.”

Around the Internet the news of the acquisition is being met with seriousness and some humor. Google Now, quickly becoming famous for users being able to simply address their device by saying, “OK, Google..” and then issuing a command, can certainly be seen as someone saying, “OK, Google adjust my thermostat” or “OK, Google, lower my heating bill.” Certainly we’ll see a couple fighting over that kind of thermostat control in a sitcom some day. For those worried about government intrusion into their lifestyles, there will also be some concerns about Google adjusting your thermostat automatically if they think you’re wasting energy. Of course the notifications for that will be interesting to see. Will Google be issuing seasonal audits of your energy usage that you can publish on Google+? Will Google call 911 if a smoke detector goes off while you’re overcooking that steak? Will users of the products start seeing ads for new heat pumps, HVACs, and energy efficient windows in their Gmail? Will you need to watch ads on the small Nest window before you can adjust your temperature?

But those are perhaps on the lighter side of some of the real potential and real concerns this move may have, given Google’s mission of cataloging all the world’s information and using that data to try and make the world a better place. Remote control systems for thermostats and other home electronic mechanisms have existed for some time, and increasingly the Internet has been playing a role in that. Certainly utility companies have access to data about usage habits. But the semiotics of the collection of that data changes with Google involved and how it could potentially use that data. Nest found a niche that energy cost conscious consumers and real estate developers are paying attention to, but you can bet that Google is interested in the data it will acquire from installs of Nest products as much as it is in profits from selling those products.

The Internet of Things promises to bring more, not less, of this in the future. Future generations won’t be dealing with the abruptness that ours faces when these kind of science fiction like changes are put in front of us today. With talk of delivery drones and other robotic solutions appearing almost daily, it’s as if we are watching cars become common place for the first time while sitting on our horses. Unlike an earlier world that saw many different makers bringing different solutions of the same ideas to market, what happens when the data that might come from various makers of new innovations gets consolidated by a few companies like Google?